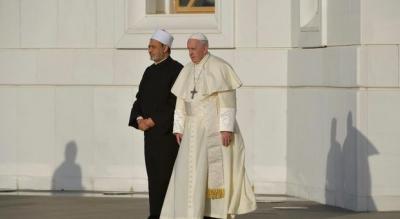 Pope Francis on his visit to the UAE (Il Messaggero)

VATICAN CITY – Pope Francis heralded Wednesday his historic trip to the United Arab Emirates (UAE) as a "new page" in the story of Christianity and Islam.

"In an era in which the temptation to go looking for conflict between the two faiths is strong," his visit gave a "clear" sign that "it is possible to find common ground," the pontiff said in his first address at the Vatican after returning from the Middle East.

During the trip, he also gave unprecedented acknowledgement of the widespread abuse of nuns by priests within the Catholic Church, which has been heralded by Vatican observers as a courageous step forwards by the Argentinian pontiff.

Francis said that the Church was aware of the “scandal,” whose roots lie in “seeing women as second class.” It is thought to be the first time he has shown recognition of the sexual abuse of nuns.

His comments come just after a senior Vatican official resigned from his post in light of abuse accusations levelled at him by a former nun (http://www.italianinsider.it/?q=node/7685).

“Pope Benedict had the courage to dissolve a female congregation which was at a certain level, because this slavery of women had entered it – slavery, even to the point of sexual slavery – on the part of the clerics or the founder,” Francis said in reference to his predecessor’s dissolution of the Community of St Jean in 2005.

“I think it’s still taking place because it’s not as though the moment you become aware of something it goes away,” the pontiff said. The Church is “working on” solving the problem and is suspending clerics who are found to have committed sexual abuse, he added.

The editor of the Vatican’s women’s magazine Women Church World said that Francis’ public acknowledgment of the abuse “can be of some help” but maintained that the Church still needs to act.

In November 2018, the Church’s global organisation for nuns denounced the “culture of secrecy and silence” that had prevented them from speaking out.