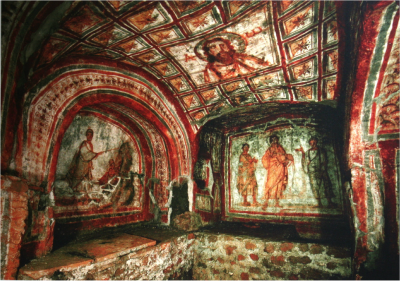 ROME - The Vatican and the Republic of Azerbaijan have renewed an agreement on the restoration and enhancement of the Catacombs of Comodilla, in Garbatella. The conservation programme has as its objective the enhancement of these catacombs in view of their opening to the public.

Azerbaijan, where Pope Francis visited in 2016, records a peaceful and respectful coexistence among the Muslim majority, Catholics, Orthodox and Jewish, and a productive inter-religious dialogue.

Tolerance and religious freedom was reiterated on Thursday afternoon in a briefing with the Catholic Bishop of Azerbaijan, the Salesian Vladimir Faketek, together with two rabbis, a Muslim parliamentarian and a religious orthodox - displaying the good relations between the religious communities, keeping in mind that 96 per cent of the country is Muslim.

“Even if the majority of Azerbaijanis are Muslim, Christians are not persecuted, they are living in peace and we try to build the future of this country together,” assured the Salesian bishop.

The preliminary operations for the restoration of the catacombs of Saint Domitilla, possible thanks to initial funding from the Heydar Aliyev foundation, led the safety and structural reinforcements of the ‘cubiculum of the lion’, which presented static problems from the use of fibre-reinforced carbon.

The conservational measures will also allow for restoration in the modern neighbourhood of Garbatella, among the most lively and dynamic in Rome.

The previous day there was an inspection by Cardinal Gianfranco Ravasi, President of the Pontifical Commission for Sacred Archaeology and Dr Anar Alakbarov, Director of the Heydar Aliyev Foundation, accompanied by the President of the Rome’s Municipio VIII, Amedeo Ciaccheri.

The works will now concentrate on the restoration of the paintings in the cubiculum and two other paintings located inside the ‘Basilichetta’. They feature representations of the martyrs Felix and Adauctus, on the back wall, and a mural with a scene of ‘traditio clavium’ (the handover of the keys), with Christ sat on the globe surrounded by Peter, Paul, Stephen, Felix and Adauctus, and showing the only remaining image of the martyr Merita, also venerated in the cemetery complex.

The previous agreements signed by the Pontifical Commission of Sacred Archaeology and the Heydar Aliyev Foundation of Azerbaijan allowed for restorative works in the Roman catacombs of San Marcellino and Pietro ad Duas Lauras, began in 2012 and inaugurated in February 2016.

Without forgetting the other two undertaking between the Foundation and the Commission, for the restoration of the monument of Zeus and the ancient lovers in the Vatican Museums. Added to all of this are the works of the catacombs of Saint Sebastian Outside the Walls, in the collection of sarcophagi, and the restoration of the bas-relief in the basilica of Saint Peter’s of Pope Leo the Great chasing away Attila the Hun from Rome.