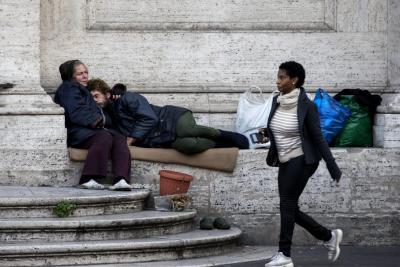 ROME - Thanks to the help of Sant’Egidio, hundreds of street-people have been granted citizenship income, allowing them to be able to “rent a room and sometimes find a job,” according to il Fatto Quotidiano.

Those who battle with extreme poverty are often unaware that the subsidy even exists. Filippo Sbrana, volunteer and coordinator of the “Housing First” project, explained that the homeless are “assisted with all the bureaucratic procedures and in overcoming the problem of the deposit,” which would otherwise be an insurmountable issue for those without savings.

Sbrana has revealed that “there are hundreds, in Rome alone, who are vulnerable but have recently obtained citizenship income.” As a result, “they have been able to rent a room as well as being able to find a job.”

During the course of pandemic, the number of beneficiaries has increased, according to “il Fatto Quotidiano,” yet many of those most in need are still unaware of the potential aid they could receive. Associations, like the “Community of Sant’Egidio,” are trying to increase awareness, as a result. The decisive support of approximately 480 euros of monthly income, in addition to the supplement of 280 euros for those who pay the rent, gives more opportunity for job-hunting.

From the testimony of the Community of Sant'Egidio, the need for income "accompaniment" emerges strongly. "We propose it to all the people we come into contact with: we help them make the virtual residence, then the documents, then the support measure," according to Sbrana.

A homeless person alone cannot follow the bureaucratic procedures – they need help, which, as much as possible, comes from the volunteers of Sant'Egidio and other associations. "We have hosted many homeless people during the winter and, thanks to this opportunity, we have been able to start the income paperwork," celebrates Sbrana. The hope is that more volunteers will be trained in bureaucratic support for those most in need. In Rome, above all, there are thousands of vacant flats and just as many people still living on the streets.