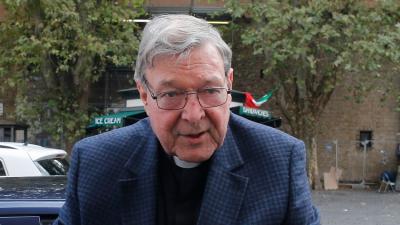 VATICAN CITY -- An image of being at hell’s gates is one, strident representation of papal renunciation. That dates back to Inferno, part one of the epic poem Divine Comedy, by Dante Alighieri. In it, he appears to reference Pope Celestine V – who stepped down in 1294 – as the man who through cowardice made "the great refusal."

Now, Australian Cardinal George Pell has reflected with similar disapproval on a more recent abdication. In his memoir, titled Prison Journal, he looks at the resignation of Benedict XVI 719 years after that of Celestine V.

“I favour the millennial tradition that the popes do not resign, that they continue until their death, because this helps maintain the unity of the Church,” Cardinal Pell writes in a passage of the book quoted by California Catholic Daily. “Improvements in modern medicine have complicated the situation, ensuring that the popes of today and tomorrow are likely to live longer than their predecessors, even when their health has been much weakened.”

Benedict XVI, born Joseph Alois Ratzinger on April 16, 1927, stepped down from the papal throne on Feb. 28, 2013, taking the title pope emeritus. Cardinal Pell’s reflections confront the complexities of having two popes – one retired, the other incumbent.

“The protocols on the situation of a pope who has resigned need to be clarified, to strengthen the forces for unity,” Pell writes. “While the retired pope could retain the title of ‘pope emeritus,’ he should be renominated to the College of Cardinals so that he is known as ‘Cardinal X, Pope Emeritus,’ he should not wear the white papal soutane and should not teach publicly."

In the jailhouse memoir, Pell meditates on the papacy of Pope Francis, the nature of suffering and his prison experiences, as he fought to clear his name of crimes for which he has consistently maintained his innocence.

In his first interview since returning to Rome following his acquittal on sex abuse charges in Australia, Pell told Associated Press of his efforts as Vatican Treasurer to clean up corruption and stamp out embezzlement, alluding to a possible link between his anti-corruption campaign and being sent back to Australia to face prosecution.

“I hope for the sake of the church, there’s nothing in it,” Pell said. “In fact, I say that quite sincerely, because some Australian people, my own family, said to me: ’Well, if the Mafia is going after you or somebody else is going after you, that’s one thing. It’s a little bit worse if it comes from within the church.”

In an excerpt from the book published by The West Australian, Pell writes, “The pedophilia crisis remains the greatest blow the church has suffered in Australia. If anyone in the mid-nineties knew the extent of the problem, they did not say so publicly, or to me privately. We thought the Melbourne Response would finish its work in a few years.”

The ‘Melbourne Response’ is a reference to the program Pell set up to deal with victims of clerical abuse in 1996 when he was Archbishop of Melbourne. The scheme was heavily criticized for drastically capping victim’s compensation, forcing victims to sign a deed of settlement and waive their right to take civil action.

The first volume of Pell’s prison diary, an account of the first five months of the 404 days he spent in solitary confinement in Melbourne, is due out December 15.