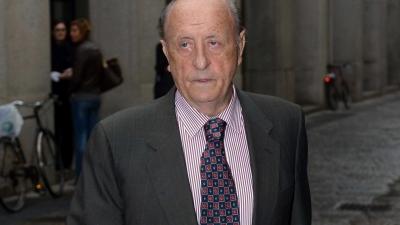 VATICAN CITY – The former head of the Vatican Bank faces an eight-year prison sentence after being found guilty of embezzlement, money laundering and self-laundering, marking the first time a Vatican Tribunal has requested jail time for financial corruption.

Angelo Caloia, the president of the Institute for Religious Works (IOR) – commonly known as the Vatican Bank – was found guilty of embezzling nearly 60 million euros in Vatican properties, which were “sold off" to his own business interests through a complex network of offshore companies and Luxembourg firms after the money had travelled halfway around Europe.

Alessandro Diddi, the Vatican’s Promoter of Justice, is also seeking an eight-year jail term for Caloia’s lawyer Gabriele Liuzzo, 96, on the same charges.

The Vatican has seized 32 million euros from their personal accounts and has frozen another 25 million in assets.

Caloia, 81, served as president of IOR from 1989 until 2009, when Pope Benedict XVI removed him from office.

Scarletti, the key player in a “monstrous” operation where 1.8 million euros in cash was transferred from Milan to the Vatican in an IOR vehicle, had been quoted as saying “If I speak, Italy crumbles.”

Caloia and Liuzzo were ordered to stand trial in March 2018 for “unlawful conduct” dating from 2001 to 2008 during “the disposal of a considerable part of the institute’s real estate assets.”

The Promoter of Justice referred to Caloia’s “absolute guilt” and the “cunning and maniacal way” he had hidden their operations from the board of directors.

Caloia tried to explain away the millions in his accounts as an inheritance from his mother-in-law. But during questioning before the court, he could not remember her name.

“The message is that the party is over and that today there is zero tolerance towards behaviour that has pillaged the Institute,” Mr Benedetti said.

The court’s decision on Caloia’s sentence is expected on Jan. 21.