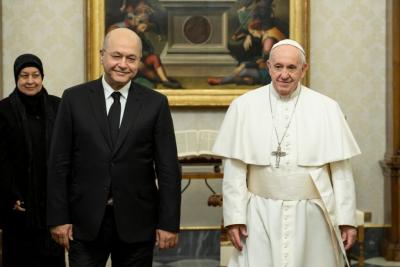 VATICAN CITY – Pope Francis is set to resume foreign travel for the first time since the pandemic hit, with a trip to war-torn Iraq in March 2021, Vatican sources said.

From March 5 to 8, the pope will “visit Baghdad, the plain of Ur, linked to the memory of Abraham, the city of Erbil, as well as Mosul and Qaraqosh in the plain of Nineveh,” Vatican spokesperson Matteo Bruni said in a statement on Monday.

Bergoglio will be the first pontiff to set foot on what is traditionally believed to be the birthplace of Abraham.

Last year, during an audience with the Reunion of the Works for Aid to the Eastern Churches, he had expressed his intention to visit Iraq in 2020.

“A persistent thought accompanies me thinking of Iraq,” Pope Francis said. “To be able to look ahead to the peaceful and shared pursuit of the common good on the part of all elements of society, including the religious, and not fall back into hostilities sparked by the simmering conflicts of the regional powers.”

In July 2019, Iraqi President Barham Saleh invited the pope to the Middle Eastern nation, hoping the visit would help the country “heal” after years of conflict.

Until 2003, the year of the conflict that led to the fall of former Iraqi leader Saddam Hussein, there were an estimated 1.2 million Christians in Iraq.

The horror of wars and the occupation of the Nineveh Plain by the Islamic State group between 2014 and 2017 reduced the country's Chaldean Catholic community to around 300,000.