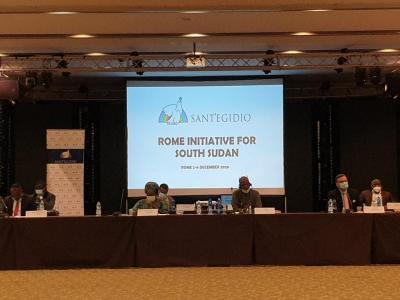 Meeting in Rome to discuss an agreement on principles to advance the peace process, Dec. 2-6

ROME – Intense negotiations between the government of South Sudan (RTGoNU) and the opposition movements gathered in SSOMA have taken place in Rome with the mediation of the Community of Sant’Egidio.

The delegations reached agreement on most of the points contained in the text called "Declaration of Principles" including:

• The federal nature of government and the division of powers

• National identity and respect for ethnic, cultural and linguistic differences

• The creation of an oversight mechanism on economic governance (revenue, budget and expenditure)

• The internal borders between the different region of the country

• The respect of territories and rights of indigenous communities

• The active participation of the International community in all the phases following the Rome initiative.

Two points are still to be agreed: the nature of the conflict and the method to approve the new constitution, which is currently being drafted. On the first point the SSOMA insists on the ethnic nature of the war while the government refuses to acknowledge this interpretation. On the second there is the dispute over the referendum as an instrument of ratification. The mediation has reserved the right to make further proposals on these issues.

The reconciliation work has been conducted in the presence of the international community and will continue in the coming days and weeks to seek shared solutions. Thanking IGAD Ambassador Ismail Wais, Kenya's Special Envoy Kalonzo Musyoka and Uganda's Special Envoy Betty Oyella Bigombe for their presence, the Community of Sant'Egidio expresses its satisfaction that violence in the Equatoria region has substantially decreased, as a result of the ceasefire monitoring agreement reached a few weeks ago in Rome in conjunction with the resumption of dialogues in October Sant'Egidio will pursue, together with the international community, its commitment to the search for an inclusive and lasting peace for South Sudan.