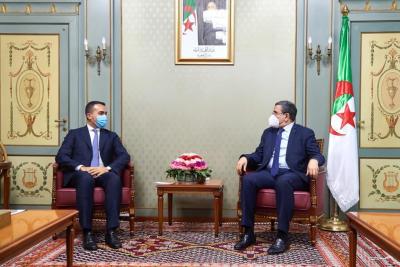 ROME – Following many meetings this year between Algeria and Italy, and despite current pandemic restrictions, Italian Minister of Foreign Affairs, Luigi Di Maio, was paying a working visit to Algiers on Saturday, which constitutes a new qualitative stage in the relations between the two countries. Along with talks with his Algerian counterpart Sabri Boukadoum, Di Maio was expected to meet with high officials of the state, most likely Prime Minister Abdelaziz Djerrad, informed sources said.

This brief stay in Algiers, centering on a joint assessment with the Algerian party of the objectives so far achieved by the Treaty of Friendship, Good Neighborliness and Cooperation initialed in 2003, will allow the two delegations to address issues relating to political and security aspects. It will also focus on the economic chapters and the revival of the program of this strategic partnership, without forgetting the unprecedented times we are living in - Covid 19; the restrictions imposed by the effects of the pandemic; the recent Moroccan aggression in Western Sahara; the security situation in Libya; and the need to fight against organized crime, which now manages some of the drugs produced in the Maghreb and elsewhere, which are intended for southern Europe.

Luigi Di Maio, who told us last September that all signals were green with Algeria, including in ​his area of competence, made it clear that with our country there are no taboo subjects, all the questions are and will be discussed in a frank and constructive manner.

A politician who now has great fondness for and familiarity with our country, Di Maio has just appointed one of his closest collaborators, Giovanni Pugliese, to the post of Italian Ambassador to Algiers - proof that this relationship has acquired a new character, oriented towards greater integration and synergy between the two sides of the Mediterranean sea.

Algeria, for its part, considers Italy a solid and reliable ally on which it knows it can count, and with whom it shares a common experience and long history.

That said, the two delegations will be keen to point out that traditional and excellent relationships in the energy field should no longer overshadow the other aspects of bilateral cooperation, which should experience constant growth and record convincing results.

The recent visits of Italian leaders to Algiers and those of our ministers to Rome, adding to the important work started by Ahmed Boutache, the Algerian Ambassador in Rome, attest to the excellence of these relationships at all levels.

In fact, Italy represents for Algeria a privileged partner because of its geographical proximity, its international status, the strength of its economy and the dynamism of its companies; this is, says an Italian diplomat, our best asset for achieving synergy between our economies and the basis of fruitful collaboration between the productive sectors of the two countries.

And it is on the strength of this observation, which has become an established fact over the years, that the Algerian party will seize the opportunity of Luigi di Maio's visit to submit to him ideas capable of providing a concrete framework, likely to act as a channel for the energies of young people from both countries, promoting development that creates jobs, which can involve other sectors and our country plans to do this by facilitating investments by Italian SMEs / SMIs in Algeria.

Other items on the agenda of this visit include the Italian contribution to Algeria’s efforts in the recovery of its archaeological and cultural heritage, the creation of bases for economic development and the industrial tourism sector in Algeria.

Finally, the Algerian head of diplomacy, Sabri Boukadoum, is likely to tell his Neapolitan "friend Luigi," – who had previously admired the bay of Algiers, comparing it to that of his native city overlooked by Mount Vesuvius – that the future of these relations is assured since it draws strength from a common past, and, a maximum reciprocal contribution will ensure the stability of this region.