Pope Francis, the 'rock' of inclusion is key to equality 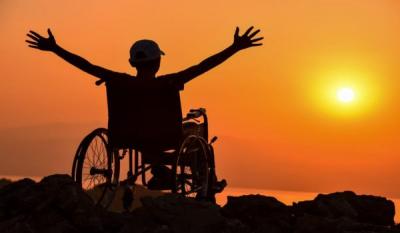 VATICAN CTIY – Inclusion was front and centre of Pope Francis' mind, who indicated his closeness with the vulnerable during the coronavirus pandemic, particularly those with disabilities, in his message Thursday to mark International Day of Persons with Disabilities.

“All of us are in the same boat in the midst of a turbulent sea that can frighten us,” the pope said. “Yet in this same boat, some of us are struggling more; among them are persons with serious disabilities.”

In the last 50 years, the pontiff said, awareness of physical and psychological limitations has grown. But more needs to be done on a cultural level to combat “attitudes of rejection” that breed “marginalization that ignores the inevitable fact that frailty is part of everyone’s life,” the pontiff said.

“Some with even severe disabilities, despite great challenges, have found the way to a beautiful and meaningful life, whereas many 'able-bodied' people feel dissatisfied or even desperate,” he said. “Vulnerability is intrinsic to the essential nature of humanity.”

In 1992, the United Nations General Assembly dubbed Dec. 3 International Day of Persons with Disabilities in a bid to increase awareness of disability issues, and to highlight the benefits to be gained from the integration and inclusion of people in all aspects of political, social, economic and cultural life.

Quoting from his recent encyclical letter, ‘Fratelli Tutti,’ the pope reiterated his warning of the threat of a “throwaway culture” that discards the most vulnerable in the community – “Some parts of our human family, it appears, can be readily sacrificed for the sake of others considered worthy of a carefree existence. Ultimately, persons are no longer seen as a paramount value to be cared for and respected, especially when they are poor and disabled.”

“The present pandemic has further highlighted the disparities and inequalities widespread in our time, particularly to the detriment of the most vulnerable,” the pope said.  “Inclusion should be the “rock” on which to build programmes and initiatives of civil institutions meant to ensure that no one, especially those in greatest difficulty, is left behind. The strength of a chain depends upon the attention paid to its weakest links.”

Meanwhile, the Community of Sant’Egidio has called for an increase in social inclusion projects that allow those with disabilities, who are among the hardest hit during the COVID-19 crisis, to realize basic rights such as housing and work.

“The pandemic, which has particularly affected the most vulnerable, such as the elderly and disabled, especially in nursing homes and other structures, highlights the right to be saved and to safety nets,” the Rome-based Christian organization said in a statement on International Day of Persons with Disabilities, highlighting their commitment to helping those most vulnerable.

Sant’Egidio said it has opened in Rome and other cities, more than 35 “innovative experiences of cohabitation” allowing those who would otherwise find it challenging to live alone, to pool their resources, avoiding the often inevitable “fate of institutionalization.”

“Born from the desire to create lasting responses over time, which allow disabled people to choose the way of life they prefer to achieve autonomy, these housing solutions can be typologically different from each other, but all have the common characteristic of recreating a family network, making the most of human, social and economic resources of people with disabilities.”

The organization is also highlighting the necessity for back to work programs, which, it said, restore dignity and normality.

“The most famous example is that of the Trattoria degli Amici in Rome (piazza Sant’Egidio), a restaurant that for more than 20 years has been experiencing a successful realization of this important right,” Sant’Egidio said.