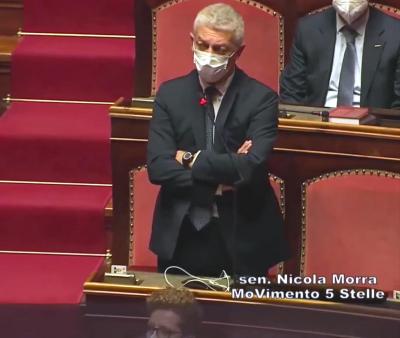 ROME – A serious episode of censorship has been carried out by Italian national public broadcaster RAI television against Senator Nicola Morra, President of the Anti-Mafia Commission of the Italian Parliament.

On Nov. 20, Senator Morra travelled from Rome to Naples, invited to speak on RAI 3’s current affairs program "Title V" but, as he was about to enter the studio, they cancelled his appearance giving unclear and confused reasons. Senator Morra had recently made harsh statements on mafia crimes with political complicity in Calabria, which also led to the arrest of the President of the Calabrian Regional Assembly, Domenico Tallini, of Silvio Berlusconi’s right wing Forza Italia party. The right accused Morra of not respecting the memory of the former president of the region, Ms. Jole Santelli, who recently died at the age of 51, but Morra has clearly stated in various interventions, also during a press conference hosted by the Foreign Press Association in Italy that such manipulations only serve to distract from serious accusations and judicial situations that are affecting right-wing politicians in that region. Faced with the serious health situation in Calabria and the rampant corruption and crime there, Sen. Morra had reproached the Calabrian voters for failing to choose their representatives in the regional government.

In this paradoxical case, it is the journalists who have censored a representative of the Italian people, probably under political pressure. Many parliamentarians and citizens are now asking for the resignation of those in the RAI network responsible for cancelling the appearance. Meanwhile Mr. Morra is receiving declarations of solidarity from thousands of citizens, directly or via social media.