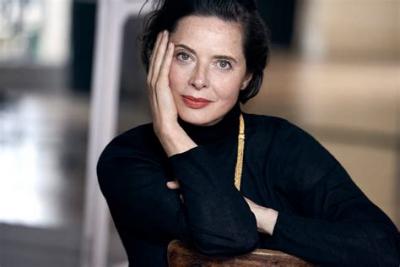 The multifaceted 68-year-old is the first artist to be receiving the newly-conceived “Stella della Mole” (Star of the Mole), an award named after the Mole Antonelliana, the landmark building of gargantuan proportions, which houses the film festival in Turin.

“We are delighted that the first to receive it is Isabella Rossellini, an internationally renowned artist, pioneer of a type of cinema so close to the TFF philosophy and always committed to the preservation of historical memory,” Enzo Ghigo, President of the National Cinema Museum, said.

"With this award, which represents not only the Mole Antonelliana but all the historical cinematographic tradition of our city, the National Cinema Museum and the Turin Film Festival want to pay homage to the Seventh Art and its protagonists,” Ghigo said.

Born in Rome in 1952, Rossellini grew up in France and Italy. Her famous parents divorced when she was five. Rossellini married director Martin Scorsese in 1979 but they divorced four years later. Beginning her modeling career at the age of 28, in 1982 she became the ‘face’ of Lancòme, but was deemed ‘too old’ to promote the make-up brand when she reached her forties. In an acting career spanning six decades, she has moved just as easily between the stage, television and the silver screen, and has appeared in more than 50 films. Among her most notable screen successes is David Lynch’s Blue Velvet, for which she received an Independent Spirit Award for Best Female Lead. The actress also holds a master’s degree in animal behaviour and conservation.

Rossellini is being recognized by the Torino Film Festival for her “inexhaustible creativity,” exploration of all art forms and her chameleonic ability to transform herself into any character from Alfred Hitchcock to a spider!

The award statue itself, also newly-created, is a 12-point star, a symbol celebrating the festival’s commitment to innovation, diversity and collaboration. It has been created to honour artists whose contribution to the cinema is as equally original as it is universal and timeless.

“The new course of the TFF, which combines past, present and future, is perfectly summarized by the image of the star, an ideal link, a precious and meaningful symbol,” Ghigo said.