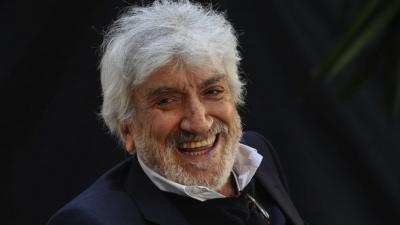 ROME – After a film and stage career spanning more than five decades, much loved Italian actor, comedian and director Gigi Proietti has died on his 80th birthday, family sources said on Monday.

The Roman actor, who had been hospitalized for tests just days ago, developed heart failure Sunday, passing away in the early hours of Monday.

Born in Rome Nov. 2, 1940, a passionate musician and singer since his youth, Proietti entered the world of experimental theatre during university.

His big break came in 1970 when he replaced Domenico Modugno in the Garinei and Giovannini musical comedy Alleluja brava gente. From the stage to the screen, great successes followed, among which are the films Caro Petrolini (1983), Cyrano (1985) and I Sette Re di Roma (1989).

As a voice-performer, Proietti dubbed the voices of Hollywood actors Marlon Brando, Robert De Niro, Sylvester Stallone and Dustin Hoffman for Italian audiences. He also lent his voice to the 1992 film "Aladdin" where he dubbed none other than Robin Williams.

Among the first to pay tribute to Proietti was Italian President Sergio Mattarella.

"It is with great pain that I learned of the death of Gigi Proietti on his 80th birthday," Mattarella said in a statement.

"A multifaceted, versatile actor, director, organizer, voice-over actor, mentor to generations of actors and natural heir to Ettore Petrolini, he was the genuine expression of the Roman spirit.”