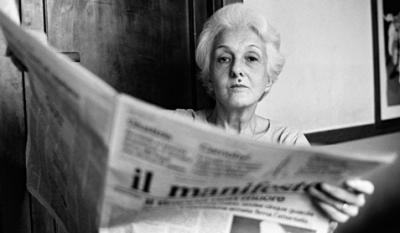 Lauded by the Italian left as a champion of women’s and workers’ rights, Rossanda defined herself as the “girl of the last century” (“ragazza del secolo scorso”) in her autobiography of the same name.

She had been admitted to hospital on April 25 for a heart attack.

News of her death on Saturday night was announced by Il Manifesto, the newspaper she directed until a clash with management led to her departure in 2012.

Rossanda was a senior official in the PCI (Italian Communist Party) for 25 years before her expulsion.

From 1937 to 1940 she attended the Alessandro Manzoni classical high school in Milan and completed her high school diploma one year early.

A pupil of philosopher Antonio Banfi, at a very young age Rossanda took part in the Italian Resistance as a partisan against German and Italian fascist forces during World War II.

In 1958 she joined the PCI Central Committee, appointed by Secretary Palmiro Togliatti to lead cultural policy, which she directed from 1963 to 1966.

A harsh critic of the Soviet Union’s “Real socialism” as well as the link between Russian and Italian parties, in 1969 Rossanda founded Il Manifesto with Luigi Pintor, Valentino Parlato and Lucio Magri.

In 1968 she strongly condemned the joint invasion of Czechoslavakia by five Warsaw Pact countries, in open contrast to the party’s position. For this reason she was expelled from the Communist Party after its 12th National Congress in Bologna in 1969.

Rossanda left politics for a few years, devoting herself to journalism and literature, but she remained close to the political arena and continued her support for workers’ and feminist struggles.