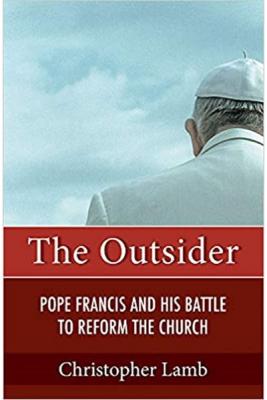 The Outsider, by the London Tablet’s Vatican correspondent Christopher Lamb, is a sustained defence of Pope Francis. Lamb presents him as reviving the hopes of the second Vatican Council and as inspirer of renewal movements throughout the Catholic Church. Occasionally he waxes lyrical in his praise.

Among the aspects of the seven year pontificate which he examines are the clerical sexual abuse scandal, the dismissal of the head of the Knights of Malta which he links with the questions posed by four cardinals to Pope Francis, and the fierce criticism of the Pope from certain Catholic media. Here he provides information on the backers of these media, mostly American, some of which want the pope to step down.

In his enthusiasm for Pope Francis, Lambert skirts the complexity of the situation. He considers that Francis has initiated a new era. He makes striking gestures in this direction, which have a big impact. However he has to win in the Vatican too but, like his predecessors, he struggles to handle certain issues.

He has not solved the problems connected with the Church’s central bureaucracy the Roman Curia. There are several cases of Vatican employees being brusquely dismissed without any explanation or any opportunity for an appeal. Moreover two journalists were put on trial before they were acquitted by a lay Vatican judge.

Lamb writes about Cardinal Pell before he was acquitted by the Australian High Court. He treats him as a dubious choice for the Vatican Economic Secretariat because of the accusations against him. But the crucial question surely is why and how his attempt to introduce a new rigor in Vatican finances were blocked.

An obscure battle continues over Vatican finances whose latest episode concerns use of the yearly Peter’s Pence collection to acquire a building in London. This came as a surprise to some contributors to Peter’s Pence who thought these funds were destined for the Pope’s charitable concerns. Pope Francis has recently appointed lay experts who seem a guarantee that greater rigor will be installed in Vatican financial operations but it is taking a long time.

Lamb reports Pope Francis’s condemnation of fake news without deploring the fact that, while Monsignor Edward Viganò (not a relative of the controversial Archbishop Viganò ) was in charge of the Vatican press office, it was guilty of fake news about Benedict XVI’s opinion of a booklet by Pope Francis. A new post was then created for Viganò (Assessor within the Communications office) and he was later shifted to be press officer of the Pope Academy of Science whose Argentinian secretary, Monsignor Marcelo Sanchez Sorondo, says China is the best embodiment of the Church’s social teaching. Viganò’s itinerary sounds like any that in any other bureaucracy.

Pope Francis has emphasised the importance of synodality and empowering local churches. But now he has expressed concern that the current Synod of the German Church will reach conclusions, which are not in harmony with Church teaching – further evidence that trying to apply the Council is complex.

Pope Francis emphasises the need for dialogue with all. But Lamb does not answer the criticism that often now it seems to be undertaken with a kind of Vatican cultural cringe, which amounts to a denial of identity.

For Lamb ‘doctrine’ seems deplorable – he frequently refers to it as ‘rigid’. It can be interpreted rigidly but it has developed after much Church suffering and experience. It is often needed as a support for a more personal encounter with God and his creatures which Francis encourages, but it shouldn’t always be coupled with ‘rigid’.

Likewise, treating all change in the Church as commendable is as shortsighted as considering any change deplorable.

Some clarifications would help the debate in the Church – Francis praises evangelization, while deploring proselytism, which for many is a synonym for evangelization. This misunderstanding has dragged on for years, which is inevitable once issues are labelled rather than discussed.

Christopher Lamb’s book makes a vigorous case for Francis but simplifies excessively the context which is crucial as it is very different now from when the Council ended 55 years ago. It aimed to increase dialogue with society but much of it proved indifferent or hostile. Pope Francis must now communicate with a largely post-Christian society, which requires a more complex approach than at the time of the Vatican Council.

The Outsider, Pope Francis and his Battle to Reform the Church