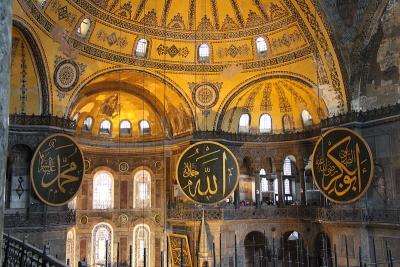 VATICAN CITY – Thinking about Istanbul after the Angelus prayer, Pope Francis said that "I think of Saint Sophia and I am very saddened," expressing the pain of the Holy See and the Catholic Church following the decision of Turkish President Recep Erdogan to transform the museum of Saint Sophia into a mosque, starting from July 24. The Hagia Sophia was built originally as an Orthodox Christian cathedral, but was converted into a mosque after the Ottoman conquest.

The very simple and dry phrase is the first and only expressed thought on the matter by the pontiff, coming as it did on Sunday. The Unesco World Heritage site in Istanbul has been a museum since 1934, upon the orders of the secular founder of Turkey, Mustafa Kemal Ataturk.

After a Marian prayer, Francis then recalled how International Sea Day marked the second Sunday of July and sent his affectionate greetings to all those who work at sea, especially those who are far from their loved ones and their country.

He also greeted those who had gathered on Sunday in the port of Civitavecchia-Tarquinia for the Eucharistic celebration.