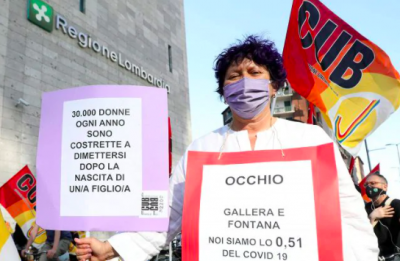 MILAN – A procession of over 600 protestors organized by local social centers gathered under the Lombardy Regional management building on Wednesday, resulting in clashes with police on the Via Melchiorre Gioia, as shown by video footage reproduced by Corriere della Sera. As the Lombardy region’s contagion rate threatens to climb during the gradual re-opening of 'Phase 2', the regional governor, Attilio Fontana, has born the brunt of the public anger, and this week was placed under police escort after a decision was made by the prefecture of Varese, the city in which he resides, reported La Stampa.

Although the number of those in intensive care has fallen, data from the Civil Protection Agency shows that over the last seven days, in Lombardy, on average 257 new cases have been detected daily, which amounts to 58 per cent of all those in Italy. Over the last 24 hours, another 593 new cases of coronavirus were identified, of which 64 per cent were from Lombardy. Other northern regions in Italy such as Emilia-Romagna and Veneto, who were also among the first to face the emergency, have experienced a much more consistent decline in the reproduction number.

Professor Luigi Toma, infectious disease specialist from the 'Institution of Occupational Physiotherapists' (Ifo) in Rome, has said that “the latest data sets show that the easing of containment measures in Lombardy has led to an evident increase in new cases. As an infectious biologist, I have the feeling that there is still something wrong with tracking and monitoring. I am referring to Lombardy, but also to Piedmont and Liguria,” he said, as quoted from Il Messaggero.

The decision to reopen the borders from June 3 continues to divide the governors, as new ISS data on tracing will be needed, and the president of the Higher Institute of Health (ISS), Silvio Brusaferro, has said that the science predicts a second wave in the fall, reports Il Fatto Quotidiano.

The governor Attilio Fontana, commenting on the data, said that he was convinced that from June 3 Lombards will be free to move throughout Italy. Fontana’s approach to the epidemiological crisis has caused anger on social media for weeks, and two murals have appeared with the words “assassin,” as reported in La Stampa.

Defending lawyer, Jacopo Pensa, said that, "we are collecting dozens and dozens of threats on social networks,” with posts such as, "Fontana you have to die", reports Il Sole 24 Ore.