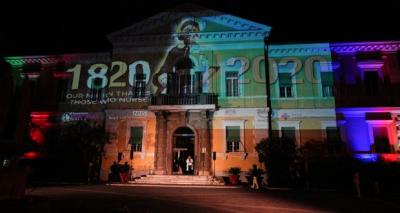 ROME – In a ceremony to commemorate Florence Nightingale, the 'mother of modern nursing' who emphasised data and hygiene in field hospitals, projections illuminated the facade of the Spallanzani hospital in Rome, as part of a joint project between the British Embassy in Rome, Florence Nightingale Museum, and Italian Nurses Federation (FNOPI), on the International Day of Nurses on Tuesday. “Florence’s legacy is relevant more than ever," said British Ambassador HE Jill Morris. "She laid the foundations for a profession that combines skills and compassion, and that supports us more than ever in these difficult times.”

As of Tuesday, the number of official coronavirus cases in Italy was 221,216, with the healed at 109,039 and the deceased numbering 30,911, according to data from the Official Protection Agency. As of Monday, around 12,000 nurses had been infected with coronavirus in Italy and 39 had died.

To mark the bicentenary in Rome, a group of Spallanzani nurses recited the Italian Nurses Pledge, based on the 1893 Nightingale Pledge of the ethics and principles of nursing, before standing for photographs wearing masks and keeping their social-distance, reports nursingtimes.

Pope Francis also celebrated the birth of Florence Nightingale on Tuesday, and prayed for the nurses who put themselves at risk of infection on a daily basis, while talking of their “professionalism, sense of responsibility, and love for one's neighbour,” as quoted from Il Messaggero.

Italy's National Federation of Professional Nursing Orders (FNOPI) will publish a live broadcast with special content dedicated to nurses and citizens, including testimonies and stories from those who have been selflessly working on the front line in the fight against Covid-19, according to La Repubblica.

There will also be a relaunch of the fundraising campaign #NoiConGliInfermieri, for donations to healthcare workers affected by the virus.

The world famous UK street artist, Banksy, revealed a new painting on Instagram last week of a nurse as a superhero with a boy playing with her, and the painting will remain on display in the General Hospital in Southampton until autumn when it will be sold to give the proceeds to charity, reported in Il Fatto Quotidiano. 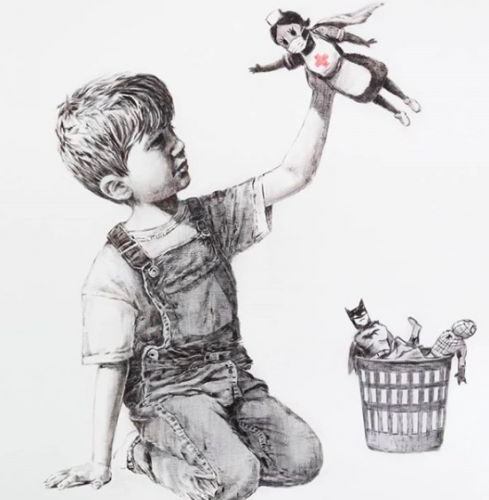