Animal violence reported on vessel from EU to Saudi Arabia 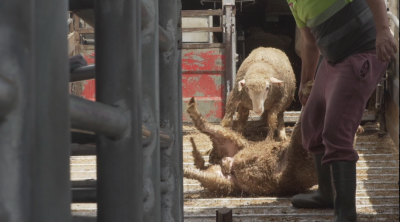 CARTAGENA – Thousands of lambs were loaded on to a transport ship for a 10 day trip from Spain to Saudi Arabia, where they will arrive on May 6 in the port of Jeddah, according to Animal Equality who have exclusive video footage. The transport took place without regulations or the respect for animal welfare standards. Once the lambs arrive, they are kept in quarantine for between 15 and 21 days, before they are taken to the slaughterhouse, where they are slaughtered according to the halal rite which stipulates that the animals, after being cut open while fully conscious, die slowly from bleeding.

Animal Equality have also documented the brutality with which the lambs, less than one year old, are treated during transportation from the farms until they are loaded onto the ships. The animals are held by the fur to prevent them from escaping while they are being loaded.

Thousands of Spanish lambs are loaded daily in the ports of Cartagena and Tarragona on ships bound for Saudi Arabia, to satisfy the demand for meat on the occasion of Ramadan, celebrated until May 24.

Reports from the meat sector in Spain show that exports to Arab countries are a way to compensate for the lack of internal demand, given that 90 per cent of lamb is consumed in bars and restaurants that are currently closed. In 2020 more than 250,000 lambs have already been sent to countries of North Africa and the Middle East for Ramadan, according to Animal Equality.

Animal Equality asked the European Union in their press statement, “to adopt more stringent and effective measures to protect these animals.”

Worldwide, more than two billion animals bred for food are transported over long distances each year, and the thousands of animals that die on the journeys are thrown overboard. In 2019, 14,000 sheep were drowned in the Black Sea following an accident on the Romania-Saudi Arabia route.