Opinion: Pity the ex-League councillor who wasn’t in Vogue 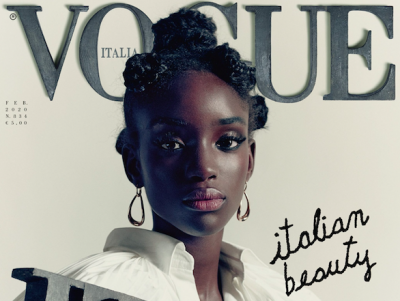 A lot of societal issues get forgotten during a pandemic, but one scandal that’s worth dragging back up again is that of the ex-League councillor Daniele Beschin, who, before coronavirus totally captured our attention, made the news for allegedly making racist comments towards Maty Fall Diba, a black model who appeared on the front cover of Vogue Italia’s February issue.

According to Mr. Beschin, although Ms. Diba was “a very beautiful girl,” she was not an “Italian beauty.” Ms. Diba, 18, had moved to Italy from Senegal nine years ago, and lives in Chiampo, a town in the province of Vicenza.

Mr. Beschin was fired by the League for his remarks, and claimed that the League made their decision on the basis of inner-party politics and political correctness. After all, Mr. Beschin stated, "the same thing would apply if an Italian girl lived in China for a while. Even if she integrated, she would remain an Italian beauty."

This is true as a point of fact, because China is quite a racialised society. For example, foreigners are seen to set high-beauty standards in China, with many women having cosmetic surgery done to westernize their appearance, such as double-eyelid surgery. It is also the case that foreigners are plastered across the fashion campaigns, magazine editorials, and television commercials, and that models are deemed desirable precisely because they look foreign. In China, a ‘foreign’ beauty would remain 'western'; although perhaps from a more honestly partial perspective than from the position of pretended impartiality as offered to us by Mr. Beschin.

The stereotype that gets privileged in China is that of a white blue-eyed foreigner, and it is therefore unlikely that Ms. Diba would have featured in a Chinese magazine regardless of her Senegalese or Italian heritage. Mr. Beschin doesn’t realise it, but his hypothetical excludes people like Ms. Diba from the beginning.

When the comparison with China is made, it does not end in the way Mr. Beschin might expect, because if Italy’s social fabric is at all analogous to China’s on the issue of race, then it is only in the negative sense – that racial discrimination is still a relatively widespread societal issue.

Of course, Mr. Beschin probably doesn’t care that this is how his China-Italy comparison pans-out in practice, because the analogy and the whole political-correctness-gone-mad idea was probably used just to distract.

Mr. Beschin stuck to the playbook, when he said, “I am surprised and bitter in seeing how my words have been deliberately misunderstood and exploited. My comment referred only to the canons of beauty and not to the fact that the beautiful Maty Fall Diba is an Italian girl, an indisputable fact.”

There are a lot of examples of political-correctness fabricating conflicts and undergoing colossal contortions in order to evade common sense, but this does not seem the case here. If anything, Mr. Beschin is the one playing strange games with the meaning of words, with what he said about the “canons of beauty” seeming to imply that the word “foreign” is void of any meaning other than that of the aesthetic.

We should look back at this forgotten case and learn to pity the ex-League councilor, his self-defeating justifications and his evident confusion. Isn’t it curious that Mr. Beschin was “surprised” that his comments (including, “a ‘Chiampese’ girl is a white and sunny girl”) caused a stir? What reason did he possibly have to be surprised, given that he was presumably aware that nowadays political-correctness is second only to coronavirus when it comes to contagion rates?

These are the type of knots that people tie themselves in, when they try to explain the way skin pigmentation should be used as a metric for an idealised national beauty standard.

I doubt Mr. Beschin ever heard of Ms. Diba before her appearance in Vogue. But, on seeing her in Vogue, and on seeing that she wasn’t white, he took to his keyboard and charged to the defense of some metaphysical symbol of Italian beauty.

Why the man would do such a thing only he knows, but if he doesn’t learn to ask more interesting questions as to why he might have said what he said, rather than hurl about low-hanging fruit, then onlookers like this one will have to take their best guess.