Crisis mismanagement and the European Parliament 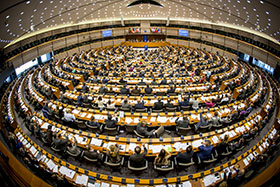 ROME - There was an air of dread across Europe as the outbreak of COVID-19 sent Italy into national quarantine, with Spain and France a short sprint behind and the rest of the EU, Switzerland, Norway, and the UK, who are braced for their turn, enacting a series of restrictive measures to cushion the impact of one of the most aggressive coronaviruses in living memory. While this global health pandemic unfolds, other crises continue to lap at Europe’s frontiers.

Acts of human vandalism continue to occur along the Turkey-Greece border, as Ankara uses refugees to press Brussels into supporting its brewing conflict with Russia, Syria and Iran for the city of Idlib. Armenia then ambushed Azerbaijani forces in Nagorno Karabakh, killing two. The Houthis in Yemen have committed untold crimes against humanity while Iraq slides back into civil war and Iran cremates away the evidence of its own coronavirus outbreak and its basij militia terrorises its people.

All in all, Europe has its hands full — or at least it should.

Despite this heavy foreign affairs agenda, or perhaps because of it, the European Parliament seems unable to set the right agenda or address the right problems. This week’s — or even this year’s — Rule 144 debate on alleged ‘Breaches of Human Rights, Democracy and the Rule of Law,’ illustrates this well. On the agenda: China, Turkey, and Bahrain. Actually, only Bahrain is under EU scrutiny; the Chinese case is of a Swedish citizen imprisoned in the country and the Turkish case, which does not even name “Turkey” for fear of offending Ankara, concerns the ‘imprisonment of Osman Kavala.’

The European Parliament’s seven political groups: the Progressive Alliance of Socialists and Democrats (S&D), European Peoples Party (EPP), Renew Europe (RE), European Conservatives and Reformers (ECR), Greens/European Free Alliance (Greens-EFA), Identity and Democracy (ID), and the European United Left/Nordic Green Left (GUE/NGL), essentially play a game of tag with each other each month to set the agenda for the plenary and add topics to debate under Rule 144. They use countries and issues around the world to gain leverage over each other within the institution and its many delegations and committees.

When issues are too ‘hot,’ like Iran’s downing of Ukraine International Airlines PS752, the European Parliament simply glosses them over and deflects with less polarising issues. This helps explain why the 2020 debates have focused on Boko Haram terrorism in Nigeria, human rights abuses in Burundi, the protests in Guinea, and child labour in the mines of Madagascar. While certainly important issues, these are hardly front-and-centre of the European political imagination.

The practice of deflecting comes at the expense of debating issues that directly impact Europe and European citizens. This is a public secret. The Members of the European Parliament may be ideologically driven in their political lives, but tend to shy away from making a foreign policy difference because that often means making a personal investment of their most sacred resources: time and energy. So, instead, they defer to their staff to act on their behalf, draft resolutions and amendments and advise on voting. This implies the loss of the MEP’s agency and the acquisition of agency for the advisors.

Given that advisors are not elected representatives, they have much more freedom of action than their MEPs — and they use it. For the most part, advisors play a constructive role and truly support the mission of their MEP. There are, however, exceptions. Occasionally, individual or Group advisors impart their own biases on the decision making process which can have a lasting impact on European relations to third countries.

It has long been curious that Bahrain — among the most politically open, religiously tolerant and socially engaged countries in the Middle East — is hauled up under the Rule 144 (previously Rule 135) spotlight with disproportionate frequency. Many Europeans would struggle to find Bahrain on a map and even more remain unaware of basic facts of the country.

So why the obsession? The answer lies in the same wrangling noted above. In this case, key members of the S&D advisory staff have, essentially, selected Bahrain as a scapegoat to punish its regional allies — notably Saudi Arabia and the United Arab Emirates — without the blowback and polarisation that would come from directly pressing Riyadh or Abu Dhabi.

Bahrain is, after all, a small state. Far too often, events that push very negative images and perpetuate disinformation about Bahrain are held within the chambers of the European legislature despite the fact the country continues to enjoy an impressive array of positive bilateral relations across the Union. This practise has to change. The European Parliament has become accustomed to treating Bahrain instrumentally and, in doing so, is expending its time and energy undermining, rather than supporting, an ally.

This will produce a residual effect: allowing intra-Group competition to taint EU relations to Bahrain (and other third countries) and illustrating inconsistencies in European international affairs.

To eliminate that discrepancy, MEPs need to take back the reigns of foreign policy making and to better coordinate their Brussels policy priorities with those articulated at home or risk a Europe of versions and with it the inability to manage real international crises and pursue European interests.