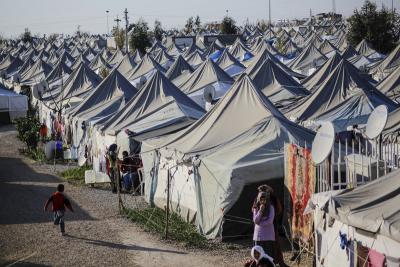 ANKARA – The World Food Programme (WFP) and the European Union (EU), in collaboration with the Turkish government and the Turkish Red Crescent, have prevented 1.7 million refugees from hitting terrible levels of poverty through monthly cash allowances, reports a UN press release. The ‘Emergency Social Safety Net’ (ESSN) was launched in 2016, and has helped mostly Syrian families, who have been better able to cover their basic needs and are less likely to have children helping earn money to put food on the table.

Syria has been in conflict for a decade, and 5.6 million people have fled the country. Each member of an eligible refugee family receives the equivalent of 19 euros per month, plus quarterly top-ups according to family size.

“We know how important this assistance is to families,” said WFP Executive Director, David Beasley. “Parents have been able to give their children a roof over their heads and nutritious food to eat. It’s given families some financial stability so they can start rebuilding their lives after the trauma of war. The support provided is a demonstration of the power of partnerships.”

EU Commissioner for Crisis Management, Janez Lenarčič said that “the European Union, together with its humanitarian partners, is continuing to make a real difference in refugee life in Turkey. They have a chance to get back to normality after fleeing atrocities and meet their basic needs, such as rent or food. I want to thank WFP and other partners for having developed this ground-breaking programme.”

According to surveys of families, their lives improved or stabilised after they started receiving the monthly cash, and data on eating habits has revealed that 97 per cent of families receiving ESSN support have managed to maintain an adequately nutritious and diverse diet.

“The assistance card has helped us in many things in winter, such as heating and buying clothes for the children and for ourselves,” said Amira, a Syrian woman living in Turkey with her husband and three children.

Since its launch, the ESSN has been implemented by WFP, in conjunction with the Turkish Red Crescent and support from the Turkish Government.