Six Nations in Rome to change in social responsibility drive 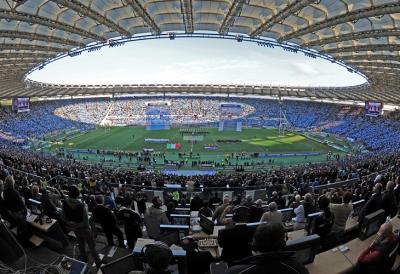 ROME – The traditional wooden spoon matchup in the Six Nations is to focus on environmental sustainability and social awareness, under the title ‘Responsible Oval World’, according to a press release on Wednesday from the Italian Rugby Federation (FIR).

A collaboration between the FIR and ‘Punto 3’, an events company that specializes in sustainability, will ensure that the 2020 Six Nations' fixtures in Rome will use compostable glasses. In addition, the Stadio Olimpico’s food waste will be recovered by Equoevento, a Roman non-profit who fight food waste.

There will also be a public transport awareness drive and alternative mobility options, through the collaboration of Rome’s transport authorities (ATAC), and public transport services Roma Mobilità and Moovit. The Vice President of FIR, Onorio Rebecchini, said that the new initiative will create, in the years to come, a Roman Six Nations that is “fully sustainable, inclusive, accessible.”

The first test match in Rome will be played on Sat. 22, when the Azzurri face Scotland, and is being built as Italy’s one chance to avoid coming in last place. If they do, they will be the recipients of the wooden spoon for what would be the fifth year in a row. Despite Italy scoring nearly three times as many points per opposition 22 entry than Scotland in this year's Six Nations, Scotland still run out clear favourites.

The Six Nations is estimated to turn-over 20 million euro for the Italian economy. Several thousand England and Scotland fans are expected to arrive in Italy for the upcoming matches in Rome, and the British ambassador to Italy, Her Excellency Jill Morris, hosts a welcome party for Princess Anne on Feb. 21, according to Corriere Della Sera.

On March 14, Italy play their final match against England, and a catwalk has been organised for the many different social responsibility projects, such as one which will influence the lives of prisoners in Italian jails, called the ‘Rugby beyond bars’ initiative, which also aims to facilitate the integration of migrants, according to the FIR.