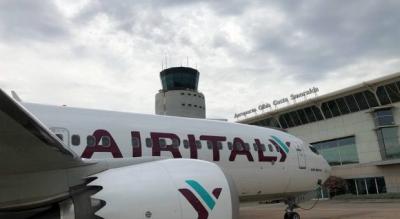 MILAN – Following a shareholders meeting on Tuesday over videocall, a decision has been made not to recapitalise and to liquidate Air Italy, as stated in an official Air Italy statement.

Passengers have been informed that if they bought tickets to fly with Air Italy before Feb. 25, they will be flown by other airlines at the same time and on the same day, while any passengers who were booked on flights after Feb. 25 will be fully reimbursed. All Air Italy planes have been grounded, and the decision to liquidate will also see the closure of Air Italy bases in Olbia and Milan, which were originally chosen in line with the airline's ambitious plans to develop international connections, reports Genoawhatson.

Alisarda had a 51 per cent stake and a Qatar Airways had a 49 per cent stake in the airline. Qatar Airways cited EU rules and quotas as prevented the company from raising the capital it needed to survive, while Alisarda have pointed towards an analysis by independent experts which revealed a lack of future prospects, reports La Stampa.

The airline, which was subject to a recovery plan in 2018, is estimated to have lost 230 million euros in 2019, which was approximately 70 per cent of expected turnover, reports Il Messeggaro.

In a letter to 1,200 company employees, shareholders said that it had been a "difficult choice." The unions representing the employees have denounced the company for "managerial incompetencies" and have also taken aim at the Italian government for "indifference,” as quoted in La Stampa.

The Italian Minister of Transport, Paola De Micheli, attempted to halt the shareholders decision but was unsuccessful, according to Il Messeggaro.

Air Italy is the second Italian company after Alitalia that has been put into liquidation.