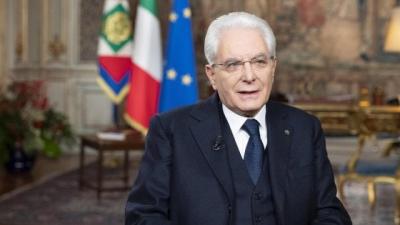 ROME – President of Italy Sergio Mattarella gave a televised speech on Monday remembering the Holocaust, before warning that anti-Semitism is not an isolated historical phenomenon.

The event was named 'Day of Remembrance: 75 years after the liberation of Auschwitz’, and it took place at the Palazzo del Quirinale. It included performances from the musician Ludovica Volari and the actress Valentina Bellè and speeches from the President of the Union of Italian Jewish Communities Noemi Di Segni and the Minister of Education Lucia Azzolina.

President Mattarella’s address honoured those who had risked their lives to save Jews. “Their gestures, courageous and reckless, are like small torches of light and hope that have illuminated a night of darkness," said President Mattarella. References were made to Italy’s history, wherein half of Italian Jews were deported to concentration camps. While praising the attitudes of contemporary Italy, President Mattarella also raised concerns that anti-Semitism had not disappeared in Italy, referencing a house in Mondovì that was recently vandalized.

In Mondovì, on Fri. 24, anti-Semitic graffiti was discovered on the door to a house that belonged to Lidia Rolfi, an Italian writer and Holocaust survivor, according to local sources. There have also been reports of Italian anti-Semitism during the day of remembrance. In Turin, anti-Semitic slurs appeared on the house of a Jewish woman, and Senator Liliana Segre, a survivor of Auschwitz who actively campaigns on the issue of anti-Semitism, was also attacked on Twitter by anonymous accounts, reported Giornalettismo.

Senator Segre is a prominent target who frequently receives anti-Semitic abuse online. A survey from The Italian Observatory on Human Rightsreported that between Nov. 2019 and Dec. 2019, 44,448 of 63,724 tweets about Jews were negative, and this represents a sharp increase in hate speech compared to previous months, such as in March to May, in which 15,000 out of 19,000 tweets were negative. Italy is one of twelve european countries in which anti-Semitism is on the rise, according to reports from the Fundamental Rights Agency.