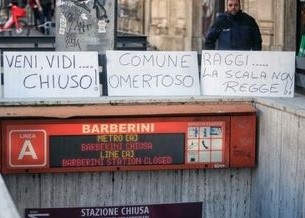 ROME – The partial reopening of Barberini Metro station, closed since March 2019, has been deferred yet again after an escalator failed a safety check, local authorities report.

A check by a Ministry of Transport office established the brake on an escalator did not work. More interventions are now necessary and are expected to take place some time next week before another test is run, Il Messaggero reported.

Even if the escalators do reopen this month – and it is now 306 days since Barberini was open – they could only be used for leaving the station. Still further work is needed before passengers will be able to board trains there.

This is merely the latest in a long line of problems with escalators in Metro A stations. Spagna station, by the iconic Spanish Steps, was shut for over a month in 2019 due to escalator problems. Even Barberini station does not quite have the international notoriety of Repubblica, where over 20 people were injured when an escalator suddenly started moving much too fast in 2018.

Baldo degli Ubaldi station has only just reopened following weeks of maintenance works on lifts and escalators, and Cornelia station is currently closed for the same reason.

The last promised partial reopening date of Barberini was Dec. 8, which was also missed, prompting shopkeepers affected by the reduced numbers of people passing by to hold a protest. A protest was also held by environmental group Legambiente at the 200th day of Barberini’s closure, on Oct. 9.

This time there have been calls from the Fiepet-Confesercenti trade association for compensation for the disruption to be deducted from taxes, Il Messaggero said.