Thieves confess to stealing Klimt painting found in a wall 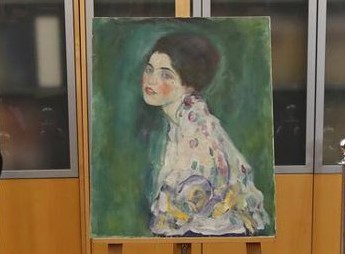 ROME – Two men have confessed to stealing and then returning the Gustav Klimt painting found in a wall cavity of the modern art museum from which it had been stolen 23 years previously, judicial sources said.

Portrait of a Lady was confirmed authentic on Friday by experts and has been valued at 60 million euros.

Two men in their sixties confessed to having taken it in a letter to local newspaper Libertà. They said they had stolen it in a way that would ensure it was returned as a “gift to the city” of Piacenza, where the gallery is located.

The letter-writers have been investigated by the carabinieri and have a history of theft. They are thought to have been part of a group of thieves operating in Piacenza in 2013.

The painting disappeared from Piacenza's Ricci Oddi Modern Art Gallery in Feb. 1997 and was presumed stolen – it is thought it may have been taken using a hook and a fishing line to pull it up through a skylight.

The painting was found when three gardeners, working to clear away ivy covering the gallery’s exterior walls, discovered a wall cavity behind a panel, where the picture had been hidden in a bag.

The painting has been valued at 60 million euros.

"This news is of historic importance for the artistic and cultural community and for the city of Piacenza," said Mayor Patrizia Barbieri and head of culture Jonathan Papamarenghi.

Tests will now be run on the painting to see where it has been kept over the past 22 years, as it is not certain how long it has been hidden in the wall.  After which, it will hopefully go back on display, prosecutor Ornella Chicca said.