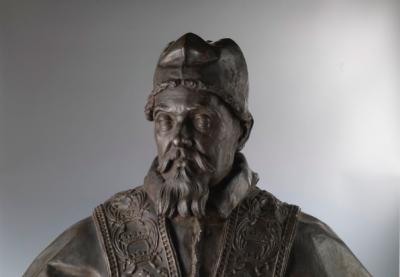 The bronze bust of Pope Urban VIII is considered a masterpiece. It was completed in 1658, fourteen years after the pope’s death, and was commissioned by Cardinal Antonio Barberini. Urban VIII is a figure closely connected with Scipione Borghese’s collection, of which he was the inspiring theoretician, according the Galleria.

The bust was made by the artist Gian Lorenzo Bernini, whose major work includes the colonnades in front of St. Peter’s Basilica and the interior decoration of the Basilica. He is also famous for the Palazzo Barberini, and for building some of Rome’s most renowned fountains such as the Fountain of the Triton and the Fountain of the Bees.

Urban VIII was closely connected to the Galleria Borghese itself, and commented on the monumental sculptures Bernini produced as a young man. The importance of both the figure portrayed and the artist who created it means that acquiring it would “fill the gap”, according to the Galleria.

The bust is currently owned by the descendants of Barberini. The work will have one of the most important places in its collection and will be accompanied by a list of the donors, the Galleria said.