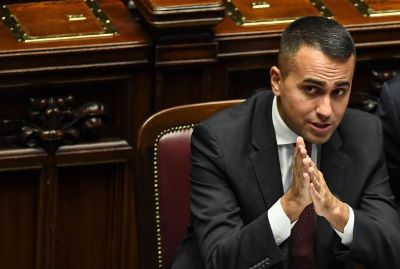 A wave of resignations and defections has shaken his control, while on Thursday a document was presented to Five Star parliamentarians calling for reform of the party and the separation of party leadership from government – impossible at the moment for Di Maio, who is also foreign minister.

Di Maio's staff have strongly refuted reports that he is considering resignation.

The document, the initiative of three Five Star senators, Emanuele Dessì, Primo Di Nicola and Mattia Crucioli, was presented to an assembly of Five Star senators and deputies with Di Maio in attendance, political sources said.

While admitting that “our political leader has shown great ability to work, obtaining excellent results,” it says “the Five Star Movement has to be led by a democratically elected collegiate body.”  Asking for the end of overlap between government roles and party leadership roles, the document (quoted in Il Fatto Quotidiano) says “the overlap is causing concentration of power and criticism just as incomprehensible for our base as it is for the general public.”

The other points addressed in the manifesto include a demand that the movement continues to strongly advocate reform, and management of the Rousseau platform by the party itself.

The document asks for the platform, used by the Five Star Movement for direct democracy, to be placed under the control of a committee of supervisors, La Repubblica reports.

The document also asks for a reform of the restituzioni system.  Political sources reported Tuesday that the Five Star Movement was going to sanction 47 MPs who were not up to date with money returns, some of whom may be expelled from the party.

Members of the Camera dei Deputati Massimiliano De Toma and Rachele Silvestri left the party on Thursday.  They follow two deputies who left on Jan. 3, three senators who defected to the right-wing League party in December and education minister Lorenzo Fioramonti, who resigned at Christmas.  A senator was also expelled from the party earlier this month for voting against the government on the budget law.  Political sources report that further resignations are expected.

With the Five Star Movement also expected to do badly in the upcoming regional elections in Emilia Romagna, Di Maio’s control looks ever more precarious.