Cancelled meetings and calls for ceasefire in Libya crisis 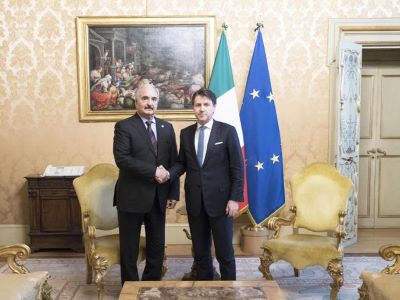 The meeting between Sarraj and Italian Prime Minister Giuseppe Conte, scheduled Wednesday, was called off at the last minute when Sarraj learned opposition general Khalifa Haftar would be present and went straight back to Tripoli after meetings in Brussels, rather than attend the meeting in Rome, government sources said.

The Libyan ambassador in Brussels said it was “unacceptable to talk with a criminal,” Il Messaggero reported.  Haftar is the leader of the Libyan National Army, which is fighting against Sarraj’s UN-backed Government of National Accord.

A story that Sarraj had been arrested or kidnapped on his return to Libya was quickly disproven.

The schedule of meeting with Haftar at 3.30 p.m. and Sarraj at 6.30 p.m. may have further annoyed Sarraj, La Repubblica noted.

Haftar’s meeting with Conte lasted nearly three hours.  They discussed the escalation in Libya and the joint call for ceasefire issued Wednesday by Russian President Vladimir Putin, who is backing Haftar, and Turkish President Recep Erdogan an ally of Sarraj.

Simultaneously, Italian foreign minister Luigi Di Maio was in Cairo, meeting his French, Cypriot, Egyptian and Greek counterparts to discuss the Libyan crisis.  At the end of the meeting Di Maio refused to sign the final declaration “because we must be moderate and not split the European Union,” he later explained, quoted in the Corriere della Sera.  He said, “the document expresses a harsh position of other countries towards Turkey and Sarraj.”

Di Maio wrote a letter appearing in La Repubblica Thursday in which he stressed the importance of international cooperation for Italy – “we start to play as a team, or we will relegate ourselves to a corner with no way out.”