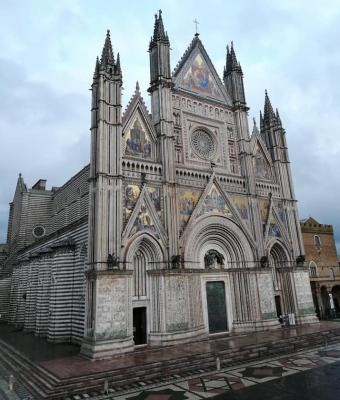 ORVIETO – The Opera del Duomo of Orvieto recently invited a group of foreign media correspondents, led by coordinator of the Culture group of the Foreign Press Association in Italy Carmen Del Vando, to a visit to the beautiful Umbrian city for cultural events.

The first was a meeting at the Palazzo dell'Opera del Duomo, where a video was screened on the restorations of the bases and the statues and their relocation, with reports by authoritative exponents of the sector, followed by a guided tour inside the Duomo (cathedral) with the illustration of the sculptural cycle of the Annunciation, of the Apostles and of the patron saints of the city, just relocated, making the imposing sacred building even more splendid.

With the second appointment, journalists visited the Claudio Faina Museum (equipped with Etruscan, Greek and Roman works of art), with particular attention to the Attic collection recently donated by the architect Mario Lolli Ghetti. The Orvieto day was completed by a visit to the St. Patrick's Well, the Duomo Museum and the Emilio Greco Museum.

The main occasion was the relocation to inside the cathedral, after 122 years of 'exile' and a transfer to four different locations, of the entire sculptural cycle of the Apostles and the four Saints, the only one still complete and preserved fully started before the advent of the Baroque. The repositioning of the statues inside the Cathedral is the conclusion of a demanding and bureaucratic restoration process, which has seen the collaboration of numerous professional experts as well as institutional subjects.

The statues had since 2006 been placed in the detached museum of the Opera del Duomo in Orvieto. The repositioning project, already outlined in 1986 by the local Superintendency, had been presented to the organs of the Ministry of Heritage and Cultural  Activities and authorized by the Superintendency itself, and was coordinated by the Opera del Duomo, chaired by Gianfelice Bellesini, who attended the meeting with foreign media journalists together with the bishop, Monsignor Benedetto Tuzia, Professor Giuseppe Della Fina, Mayor Roberta Tardani and the Superintendent of Fine Arts of Umbria, Marica Mercalli.

With the return to the Cathedral - it was said during the meeting - the sculptures have regained dignity as a work of art, albeit out of context and scale, and have returned to the centre of interest, study and debate. The statues rest on the original bases like those of the four patron saints who returned to the Cathedral of Orvieto, anticipated by those of the announcing Angel and the Virgin, made by Francesco Mochi. Made by various artists between the end of the 16th and the beginning of the 18th century, the statues are placed at the foot of the columns which present the iconic alternating bands of travertine and basalt. Of the 12 statues of the Apostles of Orvieto, the first 8 were made between 1556 and 1612: S. Paolo by Francesco Mosca known as il Moschino (1556), S. Pietro by Raffaello da Montelupo (1557), S. Tommaso, S. Giovanni and S. Andrea from Orvieto Ippolito Scalza and collaborators, S. Giacomo Maggiore from Giovanni Caccini, S. Matteo from Pietro Francavilla on a project by Giambologna and S. Filippo from Francesco Mochi.

In the same years the group of the Annunciation by Francesco Mochi (1603-1608) was also created, located inside the choir of the cathedral, and other statues that decorate the transept area and the presbytery. The ninth statue, San Bartolomeo, was made by Ippolito Buzi in 1618. The tenth, San Taddeo, was delivered by Mochi in 1644; the last two, were carved by Bernardino Cametti, between 1714 and 1722, in the years when other Apostles took up positions in the basilica of San Giovanni in Laterano.

In 1897 the so-called "liberation" restoration of purist origin wanted to cancel the Mannerist-Baroque artistic phase. The statues were first exhibited in the museum and then abandoned in the deposits where Federico Zeri came to visit them and asked for their recovery. They were then removed from the Duomo in 1897 (at the time it was in fact wanted to bring its austere medieval appearance back to the cathedral, and therefore the baroque additions were eliminated, starting with the statues, which were moved) and in recent years they were exposed in a detached seat of the Museo dell'Opera del Duomo, the former church of Sant'Agostino.

Returning them to their original location has been discussed since 1986 (one of the strongest advocates of the return to the Cathedral was Federico Zeri), an era to which the first project of the superintendency dates back, but it was only possible to achieve it in 2019: the result contributed different subjects, or the same superintendency, the Opera del Duomo, the Municipality of Orvieto, the diocese of Orvieto-Todi and Enea, which oversaw the scientific and innovation aspects in the prevention of seismic risk (all the statues were equipped with anti-seismic bases). The return of the statues also provided an opportunity to carry out structural checks on the architectural elements of the cathedral and some interventions to protect it from earthquakes. Now the Cathedral of Orvieto, a unique masterpiece of its kind, has returned in its most beautiful guise to the wonder of the faithful and visitors from all over the world. 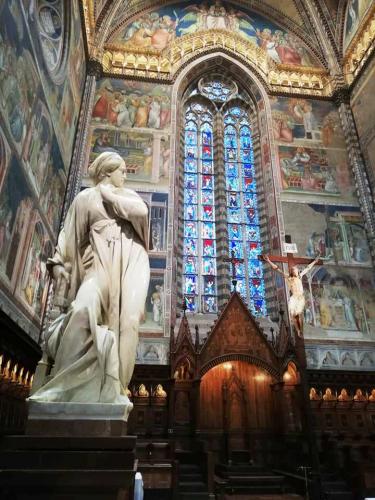