Let's hear it for Canova and Thorvaldsen 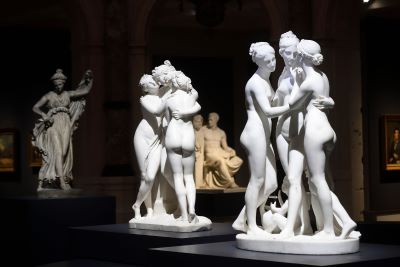 ROME - The rivalry between two early 19th century sculptors, Antonio Canova and Bertel Thorvaldsen, re-emerges in simultaneous major exhibitions in Rome and Milan.  In Milan their works are brought together on a large scale for the first time.  Both are excellent, each with over 160 works well - mounted and with loans from other European and North American museums.

The Milan exhibition is subtitled ‘the birth of modern sculpture.’  Look to Rodin for that - both exhibition artists looked back to classical Greek sculpture.  However their success re-established sculpture as a major art – aided by many types of reproductions of their work, they were adored in and beyond Italy. Only in this sense were they precursors of modern sculpture.

Canova had as much talent as Renaissance and ancient Greek sculptors.  From a northern Italian family, he was raised mainly by his grandfather a stone cutter and sculptor for local churches.  Antonio exhibited successfully in Venice in 1796 before coming to Rome, Pompei and Paestum where he saw sculptures from ancient Greece and Rome. His gifts were recognised in Rome and he acquired a large studio, still extant, in via delle Colonnette.  It was a ‘factory’ where many produced different parts of his designs before he put the ‘finishing touches.’  The Rome exhibition has a fine reconstruction of this factory as well as recreating copies of some sculptures together with the original settings for which they were intended. There are some curious exhibits such as a mini-model for his statue of George Washington.

In 1797, the Dane Bertel Thorvaldsen, who was 13 years younger, reached Rome.  His first years were difficult but he adopted Canova’s assembly–line production methods and entered the market with similar sculptures although with a matte, rather than smooth and sensual finish.

A pointer to his success was a commission for the funeral monument of Pius II which aroused protests from those who thought his Protestantism should have disqualified him.  Although a Freemason, Canova has several of his works in the Vatican.

I am not enthusiastic about many sculptures of the two artists who were influenced by the theories of another Rome resident, Johann Joachim Wincklemann.  His neoclassical creed often led to simple and elegant works which sometimes seem tightly snaffled and raise the question ‘where’s the bloody horse?’

Thorvaldsen stuck more rigidly to the Greek models whereas Canova maintained that one should never just copy them and he refused to restore ancient statues.   At times he succeeded in turning stone into flesh and aimed to make it dance as shown, in the Rome exhibition, by the Woman with her Hands on her Hips from the Hermitage which revolves on its base in a mirror-lined room.  He succeeded likewise in his The Three Graces, also from the Hermitage, which is the centrepiece of the Milan exhibition together with Thorvaldsen’s more static, austere treatment of the same subject.

I am interested in the two sculptors themselves.  Canova’s self-portrait recalls that of Gian Lorenzo Bernini in the Borghese Gallery: the same tense expression and extraordinary eyes, lively and disquieting. He was slight compared to robust Thorvaldsen whose strong face in his self-portrait matches the energy evident in his sculptures. Canova had a reserved character whereas Thorvaldsen was sociable.  In one of the Milan exhibits, he depicts himself in company at a Trastevere eatery in Rome. In the two sculptors, the stereotypes of sociable Italians and reserved Danes were reversed.

When French troops occupied Rome and installed a Republic in 1798 (there are paintings of their entry to the city in the Rome exhibition,) they made Canova head of the Institute of Art they created.  When, some months later, they demanded its employees sign a declaration that they hated all sovereigns, Canova refused. He said he did not hate anyone, resigned and returned to his birthplace Possagno in the pre-Alps until the French left.

Then he returned to Rome and was made responsible for all the arts in the papal states.  Pope Pius VII ordered him to go to Paris to recover the art and manuscripts the French had taken from the Papal States.  In the Rome exhibition, there is a page from the letters he sent from Paris to Cardinal Ercole Consalvi, the pope’s Secretary of State, about the difficult negotiations which were eventually successful. The letter is flanked by Thorvaldsen’s bust of Cardinal Consalvi, the only work of his in the Roman exhibition. That was done at the beginning of the 1840s – Canova had died in 1822 and Thorvaldsen was to die in Copenhagen in 1844. Before his death a Thorvaldsen museum was established in Copenhagen, the first-ever of a living artist.  It has sent many of his works to the current Milan exhibition.

Palazzo Braschi (The Rome Museum) is an apt site for the Rome exhibition as it was built by Pope Pius VI ( Giovanni Angelo Braschi ) for his relative Luigi Braschi-Onesti. Pius VI was taken to France and imprisoned for his refusal to obey Napoleon. He died in France. Braschi-Onesti was mayor of Rome during the subsequent French occupation which led to his excommunication but he was pardoned by Pius VII. 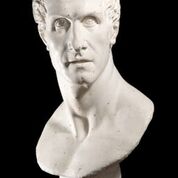