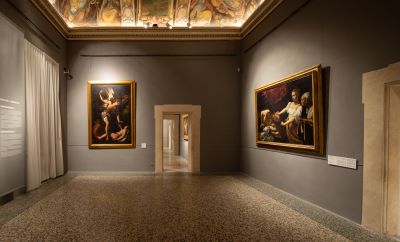 ROME – Caravaggio may be the highlight, but there is far more to appreciate and discover in Palazzo Barberini’s new display of sixteenth and seventeenth-century art.

The reorganisation and restoration of the north wing of the palazzo’s piano nobile arranges late sixteenth century paintings chronologically and geographically through a number of rooms, taking us up to the seventeenth century with both world-famous masterworks and lesser-known treasures.

The display begins with late mannerism and the end of the sixteenth century.  There is a striking Venus and Adonis from the School of Titian, recently restored, and two paintings by Flemish painter Franz Francken the Younger exhibited for the first time, alongside religious works by El Greco and Passerotti’s allegorical, slightly disturbing paintings of everyday life.  An exquisite portable altarpiece is emphasised by being placed alone in a small room, which – like many in the palazzo – has a beautifully painted ceiling.

The works of Caravaggio, the Caravaggisti, his rivals and his imitators, are spread out through three rooms.  Of course, Caravaggio’s Judith Beheading Holofernes is the most famous, but the gallery has made a considered choice not to display it alone.  Instead, it is one in a room of paintings by artists who picked up on or responded to Caravaggio’s style, including Sacred Love and Profane Love by Caravaggio’s rival and enemy Giovanni Baglione.

The aim, it was explained at the opening of the new display on Thursday, was to encourage people to look at different themes within the paintings.  It works – through comparing the paintings, attention is drawn to details that might otherwise be missed.

It is particularly effective for Caravaggio’s San Francesco, displayed alongside a painting on the same subject by Orazio Gentileschi (whose daughter Artemisia’s famous version of Judith beheading Holofernes, in the Uffizi, is even bloodier than Caravaggio’s.)  Caravaggio’s St Francis holds a skull, a man in deep spiritual reflection.  By contrast, Gentileschi’s St Francis is almost dying, supported by an angel in the moment of having a vision, stigmata clearly visible.

That is not to say that the other paintings are only useful in that they complement the Caravaggios.  Not all the painters exhibited here can compete with him, but many are treasures in their own right.  A painting by the so-called Candlelight Master is a brilliant study in symbolism and chiaroscuro.  In the last rooms of the display, moving to the seventeenth century, we find the mysterious Donna con turbante – traditionally thought to be by Guido Reni, it is attributed here to Ginevra Cantofoli, a Bolognese painter.

It was long considered a portrait of Beatrice Cenci, executed on papal authority for the murder of her abusive father in 1599 and subsequently represented as a tragic heroine by Shelley, Stendhal, and others.  The Palazzo Barberini is taking no chances, calling it a presumed portrait of Cenci, yet it is hard not to be struck by the beauty of the portrait, whoever it is of.  It is a dramatic finish to an excellent new arrangement. 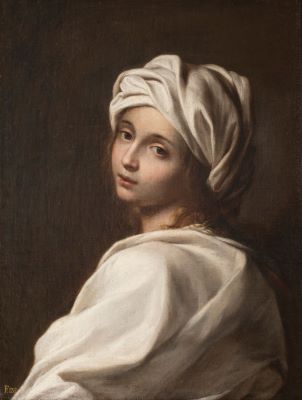