Old photographs give a new insight into Bulgarian history 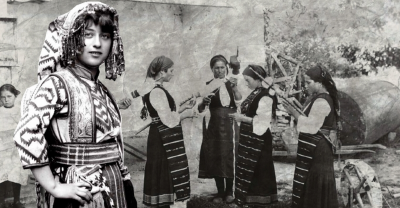 ROME – Early twentieth-century photographs preserved on glass plates provide a unique window into Bulgarian daily life of the period in the Museo di Roma in Trastevere’s new exhibition, “Bulgaria through the Glass Prism of Time.”

The exhibition officially opened Wednesday night with a crowded inauguration featuring a performance of Bulgarian traditional music for piano and voice.

The exhibition focusses around the 36 glass plates, which present unique images of Bulgarians and Bulgaria in the early twentieth century.  There are images of churches, the Bulgarian capital Sofia as it once was, traditional clothes, dances, jewellery and people at work.

In addition to the plates, the exhibition featured a film and projections, as well as some of the typewritten documents – such as news releases of the era – in which the plates had been wrapped.

The plates were given to Antonina Stoyanova, then first lady of Bulgaria, by Nadezhda Blinakov De Micheli Vitturi, an Italian aristocrat with Bulgarian family, in 1996.  They had belonged to her grandfather, Marko Bliznakov – a businessman and Bulgaria’s Honorary Consul in Italy, brother-in-law to Italo Svevo and close friend of James Joyce.  Marko Bliznakov had asked photographers to capture daily Bulgarian life and the beauty of the country.

The exhibition marks the 140th anniversary of diplomatic relations between Italy and Bulgaria, it was noted at the event.  The historical and cultural links of Italy and Bulgaria were outlined by speakers at the opening of the exhibition, including the fact that in 2019, the European Cities of Culture were Matera in Italy and Plovdiv in Bulgaria.