ROME -- When Alasdair Gray published Hell in 2018, followed this year with Purgatory, there were already dozens of translations of the Divine Comedy available.  Despite the crowded field, Gray’s versions of the first two books of Dante’s masterpiece stand out.

Gray, now 84, is an award-winning Scottish writer and artist best known for his novel Lanark.  In these new books, he does not so much confront the traditions evolved over 700 years of Dante translation as ignore them completely, right down to the titles – he refers to the work as the Divine Trilogy rather than as the Comedy.  He happily misses out long passages, so that some cantos are considerably shorter than in the original.  There are no footnotes.  Although dealing with a canonical work of literature surrounded by a long tradition of scholarship, he often uses colloquial language, dialect or simply swearwords – “Fuck you!” one damned soul yells at God – to better get the message across.

And up to a point, this “Englished” (as Gray refers to it) Divine Comedy works.  After all, neologisms and vernacular language are in some ways very appropriate for Dante, who wrote in Tuscan at a time when all serious scholarship was still in Latin.  The original poem uses both unpolished and elegant language, so it is suitable that Gray’s version keeps in some harshness of tone.

The books are not intimidatingly huge or difficult to follow – but nor are they over-simplified, despite the addition of short titles to the separate cantos.  The historical references and allegories are kept in.  Hence, Gray’s is a fast-paced, readable rendition that does not make too many compromises.  He adds his own voice to the poem – it is still Dante, but it is also feels like more of collaborative effort than most translations.  Reading a Divine Comedy including the description “Like Highlanders bemused by city streets,” is not quite like reading the original, but that was never Gray’s intention.

There are aspects to take issue with.  Stylistically, Gray often makes lines scan by simply missing out a few prepositions, which is jarring to read.  Dante’s terza rima is notoriously difficult to render into English, so Gray tries to avoid sounding forced by not adhering to a strict rhyme scheme.  This does not prevent the occasional line from being ungrammatical to the point of nonsense: “You’ve seen the Hellish, also purging fires.”  Perhaps most controversially, Gray represents Guelphs and Ghibellines as Whigs and Tories, an intriguing if ahistorical device which results in some odd phrases: “I am Manfred, ruler of Sicily, Tory warlord who defied the Pope.”

The original Inferno is shockingly violent, and sometimes surprisingly coarse.  Many translators choose to downplay the gore and horror.  In Hell, Gray jumps straight in.  He represents the poem as it is, even if he does not translate in a conventionally accurate way.

But by the time we get to Purgatory, and Dante has switched from torment to theology, the rough translation works less well.  Perhaps it is unfair to blame Gray entirely – Purgatorio lacks Inferno’s grim fascination.  The Earthly Paradise is harder to make interesting than a three-headed Satan crying while he chews up traitors.  This is particularly true for an English translation prioritising the sense of the poem over the exact wording, which necessarily loses the complex language of the original Purgatorio.

Purgatorio as a whole is slower, more reflective and harder to understand – a text for which you really do need the footnotes and nuance which Gray does not include.  You don’t need too much context to appreciate the tragedy of Paolo and Francesca in Hell, but without a good knowledge of medieval Christian history and the Book of Revelation, the allegories of Purgatory’s final cantos are just a set of jumbled-up pictures.  Like any visions, they need interpretation.

However, there are already enough translations and commentaries which deal with Divine Comedy minutiae in painstaking detail.  Even if Gray goes too far the other way in redressing the balance, his sketched-out and somewhat Scottish Dante remains readable and innovative.

It is a shame, however, that he gave up on the pictures.  His drawings of Dante and Virgil, or of outstretched hands in the Dark Wood where the poem begins, are beautiful.  The lines of the famous inscription (altered by Gray to fit the rhyme scheme) “All you who enter here, abandon hope!” are both part of the text and the decoration, printed as though carved above the door to hell.  But that’s it, which is quite disappointing for a book described as “Decorated by Alasdair Gray.”

These are not books to please traditionalists, but then again, they do not try to.  They are instead versions for those who want to read the Divine Comedy as a poem as well as a treatise or a historical document.  We await the Englishing of Paradiso with impatience. 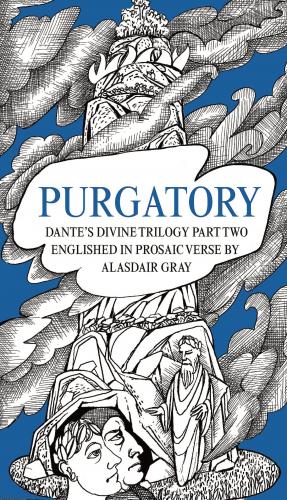