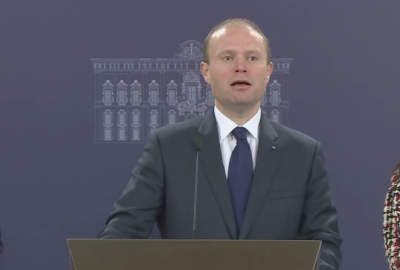 LA VALLETTA – Maltese prime minister Joseph Muscat has announced that he will be resigning from the office after Jan 12, government sources reported.

Muscat, 45, who has been prime minister since 2013, will serve until a new leader of the Labour Party is chosen in an electoral process in January, The Times of Malta reported.  He will step down as party leader on Jan 12 and resign as prime minister shortly afterwards, he said on Sunday.

"In the meantime, I will continue to carry out my responsibilities as Prime Minister and Leader of the Labour Party. I am ensuring stability in the leadership of the country," Muscat announced in a televised address.

He made the announcement several hours after a crowd of thousands demanded his immediate resignation so that justice could be served for murdered investigative journalist Daphne Caruana Galizia, in a protest organised by civil society groups and supported by the opposition Nationalist Party, The Times of Malta said.

On Sunday evening, leader of the Opposition Adrian Delia announced that the Opposition would not participate in any events in which Muscat was acting as prime minister, The Malta Independent said.

“The longer he remains in his position, the longer justice takes to prevail,” Delia said, quoted in The Malta Independent.