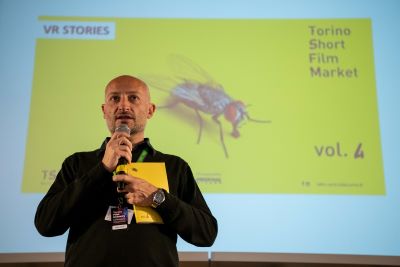 ROME – The fourth edition of the Torino Short Film Market has concluded with success and to the satisfaction of organisers and participants. The TSFM was organised by the Italian Short Film Centre in collaboration with The National Museum of Cinema - Torino Film Festival, and took place in Turin between 21 and 23 November in the dignified setting of Palazzo Graneri della Roccia, headquarters of the Circolo dei Lettori Torino.

Among the most anticipated moments was the presentation of the 2019 Awards.

The Fondazione Sardegna Film Commission – Oltrecorto Award, worth 5,000 euros, was won by “Siege” by Istvan Kovacs. The prize consists of an exploration trip throughout Sardinia for three members of the film team who will be accompanied by a location manager from the region. This is an extraordinary opportunity to discover one of the most fascinating, mysterious and film-friendly parts of Europe. Special mention went to “The shape of snow” by Andrea Brusa and Marco Scotuzzi.

The Tk4k@ProximaMilano-Oltrecorto Award, consisting of a session of colour correction at the studios of Proxima Milano, was won by Ivan Kovacs’s “Siege”.

“All cats are grey in the dark” by Lasse Linder (Some Shorts Distribution) was the recipient of the Sub-Ti Award – Market Screenings Award, which will allow the short film to be subtitled in English, Italian, Spanish, German, Portuguese or Polish.

“Guy proposes to his girlfriend on a mountain” by Bernhard Wenger (Lemonade Film Distribution) won the Sub-Ti Access – Market Screenings Award, which entails the creation of an accessible version of the film for the vision and hearing impaired both in English and Italian.

The winning films of the Radiator IP Sales – Short film video library Award, which will receive training around film festival distribution, were “Dabur” by Saeid Nejati, “Vinegar Baths” by Amanda Nell, and “Child” by Talia Zucker.

Last but not least, the winner of the When East Meets West – Pitch Your Fest! Award is the Brussels Short Film Festival, represented by Romane Pangrazzi.

“The Torino Short Film Market has continued to grow this year,” said director of the Italian Short Film Center, Jacopo Chessa.  “Its success can be seen in the number of participants, the quality of the projects presented, its international character, and in the feedback we received from the professionals who attended. Over three days, the TSFM gathered the key international players on the short film scene, and then some, with roughly 600 accredited participants. This is a snapshot of a market in full expansion, in which Turin is by now, and with full rights, one of the major players internationally.”

The Fourth Torino Short Film Market was the only festival dedicated to short films, other than the Clermont-Ferrand International Short Film Festival, to receive a grant from the Access to Market programme of Creative Europe MEDIA in 2019. It was also supported by the Italian Ministry for Cultural Heritage and Activities (MiBACT), Regione Piemonte, Unifrance, Culture Ireland, Screen Ireland, the Embassy of Ireland in Italy, Instituto LUCE – Cinecittà, the Turin Chamber of Commerce and Compagnia di San Paolo.