Protests in Venice against MOSE and the mayor 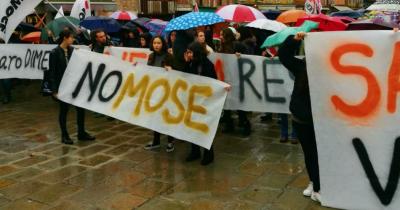 VENICE – A protest against big cruise ships, MOSE and the mayor took place ahead of Tuesday’s council meeting to deal with the fallout of historic flooding in La Serenissima, local media reported.

A ministers’ meeting on Tuesday in Rome, overseen by prime minister Giuseppe Conte, will be discussing the completion of the MOSE flood defences in addition to flood damage and management, Il Fatto Quotidiano reported.

Hundreds of people joined a protest to demand the mayor’s resignation and an end to MOSE and big cruise ships in the city.

Undeterred by pouring rain and an acqua alta flood that day of 130 cm, the protest organised by the ‘No Grandi Navi’ campaign and Fridays for Future Venezia gathered in Campo Santa Margherita before heading through the streets to Campo Santo Stefano, local newspaper Il Gazzetino reported.

The organisers assert that the cruise ships and the excavation of the channels to allow them through the city are damaging Venice and increasing the risk of floods.

They have also said that the MOSE flood defence project, which was begun in 2003 and has so far cost 5.3 billion euros, is “the problem and not the solution.”  MOSE failed to protect Venice from the disastrous recent flooding in which the water reached the highest levels in 50 years.

Further protests were expected in the coming days, the organisers said.