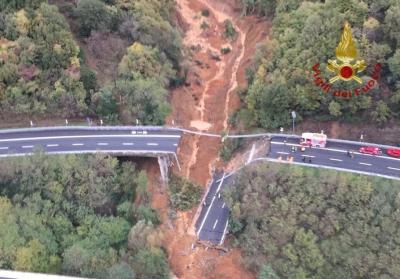 ROME – A viaduct on the Turin-Savona motorway collapsed after a landslide and a woman has drowned in Piedmont as the severe weather shows no sign of letting up, authorities report.

The landslide hit the Madonna del Monte viaduct on the A6 near Savona shortly after 2 p.m. on Sunday. No injuries have been reported, although the authorities are searching for any cars that may have been swept away by the mud.  Il Messaggero reports that a witness said they saw a car buried.

The fire brigade say that the inaccessibility of the site and the risk of further landslides is making operations particularly difficult.

Casualties were prevented in part through the efforts of Daniele Cassol, 56, who was travelling on the road when the landslide struck.  He stopped his car and prevented others from driving off the edge of the road, Il Messaggero reported.

A group representing the families of the 43 people who died when the Morandi Bridge viaduct collapsed in 2018 has demanded action from the government on the safety of road infrastructure.

Meanwhile a woman named as Rosanna Parodi, 52, was killed Sunday when the Bormida river overflowed, La Repubblica Torino said.  A nurse in a care home in Sezzadio, in the province of Alessandria, Parodi was on her way to work by foot, having left her car to try to cross a flooded area.  She tried to take refuge in the car of two people who had ignored the bans on trying to cross the flooded road by car.

These two people managed to save themselves and were later taken to the Alessandria hospital for hypothermia treatment, La Repubblica Torino reported.  Parodi, still in the car, was swept away by the flood and found dead on Sunday night by the fire brigade.

“To think that in 2019 something of this sort can happen is absurd,” said Enzo Daniele, mayor of Sezzadio.

La Repubblica Torino reported that the Piedmont regional government has decided to ask for the recognition of a state of disaster after three days of heavy rain.

About a thousand people have been cut off by an avalanche in Val d’Aosta, local authorities report, and the region remains on an orange weather warning.