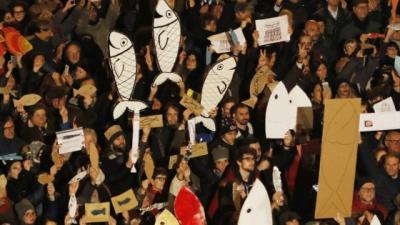 ROME – The organisers of the “sardines” movement have launched a manifesto calling for protests against populism, political sources report.

“Dear populists… the party’s over,” it begins.

They have announced a further ten protests around Italy and filed a trademark for the “6000 Sardines” symbol to protect against fakes, La Repubblica Bologna reported.

Notwithstanding heavy rain, at least 500 “sardines” turned out in Sorrento on Thursday morning to protest against Matteo Salvini, leader of the League.  As at the sardine protests in Bologna and Modena, the protestors sang “Bella Ciao,” the World War Two resistance song, and chanted, “Sorrento non si lega.”

In Sorrento, the sardines called themselves “fravaglie,” which means little fish in Neapolitan dialect, La Repubblica Napoli reported.  They carried books which they intended to give to Salvini.

"I have sympathy for anyone who demonstrates democratically for their ideas, but I choose my books myself," Salvini responded.

The sardines movement began in Bologna, where a protest organised by four people over Facebook drew a crowd of thousands and kicked off a movement that has hit national and international news.  The sardines were demonstrating against the presence of Matteo Salvini and the League’s launch of its candidate for the upcoming Emilia Romagna regional elections.

The next sardine protests are planned for Palermo, Reggio Emilia, Perugia and Rimini.

To fight the “sardines against Salvini,” Salvini has responded with “kittens with Salvini,” Corriere della Sera reports.

The sardines protests come in the run-up to the Emilia Romagna regional elections.

A poll conducted on the Rousseau website Thursday among Five Star Movement members gave a 70.6 per cent result in favour of fielding an independent Five Star candidate for the election.  The Five Star Movement are currently in a ruling coalition with the Democratic Party, but many view the vote's result as a criticism of Five Star leader Di Maio and the coalition alliance, political sources reported.