ROME--The dusty path that snakes through the landscape in the world's most famous painting is actually a river, according to an Italian art historian who recently restored a copy of the Mona Lisa attributed to Leonardo da Vinci's workshop.

The Torlonia Gioconda had been on loan to the Italian parliament since 1925, where it languished in obscurity in a 19th century frame. It was restored during the summer in preparation for an exhibition on "Leonardo in Rome", which opened last month in the Villa Farnesina, offering a fresh insight into what may lie behind the grime and varnish of the Louvre's most celebrated masterpiece.

"There's no doubt that it is a river. I did the initial cleaning myself," said Antonio Forcellino, one of the exhibition's curators. "It comes down from glaciers in the mountains and irrigates the dry earth. It's a symbol of fertility typical of Leonardo.  After all, this is the portrait of a young wife, so it can be seen as an augury for her."

The woman with the enigmatic smile in the Rome Mona Lisa is younger and paler than the Paris original, but the details of the landscape are closer to the original than any other known reproduction, including one held in the Prado Museum in Madrid.

Mr Forcellino believes Leonardo probably contributed to the painting himself, particularly to the subtle chiaroscuro technique used on the woman's face.

His discovery will increase the pressure on French authorities to allow restoration of the fragile original, he said. "This is the most famous painting in the world, which people are unable to see. They are afraid to touch it because they don't know what will emerge."

Believed to be a portrait of Lisa Gherardini, the wife of a wealthy Florentine cloth merchant, Francesco del Giocondo, the painting was bought by King Francis I of France shortly after Leonardo's death. Problems with the quality of the paint were documented as early as 1624 and exacerbated by crude restoration attempts over the centuries.

"The question is whether to keep it as an invisible icon, or allow people to see the details of what Leonardo really painted. I think this restoration should be done," Mr Forcellino said.

Roberto Antonelli, a co-curator of the Rome exhibition, shares Mr Forcellino's view. "The Louvre Gioconda has never been properly restored. In our painting it's not a path but a river, water that generates life. Perhaps that is also the case in the Louvre," Prof. Antonelli said.

Emeritus professor of philology at Rome's La Sapienza University and vice-president of the Accademia dei Lincei, which sponsored the exhibition, Antonelli said the Torlonia Gioconda helped to illuminate its sister in the Louvre. He agreed the discovery could increase pressure for the Paris painting to undergo restoration.

Another restored Leonardo on display in the Villa Farnesina is a workshop copy of Salvator Mundi, the painting controversially sold at auction for more than $450 million and now reported to be adorning the private yacht of Crown Prince Mohammed bin Salman of Saudi Arabia.

The oil on wooden panel on show in Rome comes from the Church of San Domenico Maggiore in Naples. Mr Forcellino believes Leonardo lent his hand to the delicate rendering of the curls and beard of Christ, as well as directing the work of his assistants.

Free of heavy restoration and with provenance dating back to 1620, be believes it leaves the Middle East version in the shade. "If the market had any sense, the Naples version would be worth more than the heavily repainted one that we're not allowed to see," he said. The Saudi painting had been expected to go on show in the Abu Dhabi Louvre but mysteriously failed to materialise there.

"The problem is how the market works. It requires a shameful sensationalism in its attributions. Saying a work is an authentic Leonardo adds hundreds of thousands of dollars to its value. But Leonardo didn't paint like other artists and his reluctance to wield a brush has been well documented."

Mr Forcellino said the Renaissance genius directed the activity of his workshop assistants, only occasionally contributing with his own hand, while the market continued to crave his "authentic" works.

"In the 19th century sophisticated collectors knew the value of things and placed their paintings in their homes under the scrutiny of their cultured friends. Today paintings are bought by banks and speculators, who can buy the opinion of three experts and get the works displayed in a museum before locking them away in a bank vault."

London's National Gallery had helped to authenticate the Saudi Salvator Mundi by putting it on display as a Leonardo in 2011, he said. 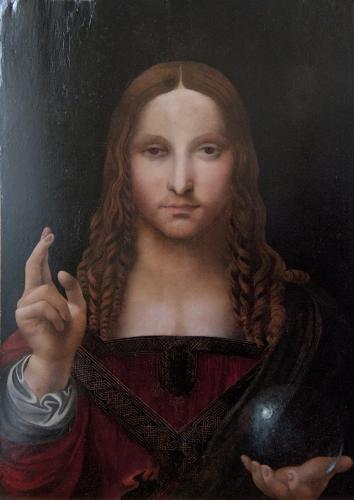