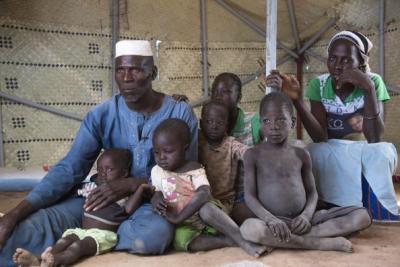 Photo: WFP/ Marwa Awad, A family displaced in Burkina Faso, now living in a camp in Pissila, a town north of the capital Ouagadougou

OUAGADOUGOU – The United Nations World Food Programme (WFP) warned Tuesday of an escalating humanitarian crisis in the Central Sahel region of West Africa, cause by widespread violence and the long-term impact of climate change.

WFP said the humanitarian response needed to be rapidly escalated to protect and save lives in Burkina Faso and its neighbouring countries.

“A dramatic human crisis is unfolding in Burkina Faso that has disrupted the lives of millions. Close to half a million people have been forced from their homes and a third of the country is now a conflict zone,” David Beasley, WFP’s executive director, said.

“Our teams on the ground are seeing malnutrition levels pushed well past emergency thresholds – this means young children and new mothers are on the brink. If the world is serious about saving lives, the time to act is now.”

According to WFP statistics, there has been a sharp increase in violence in Burkina Faso, with reported civilian deaths in the first half of 2019 four times the total recorded in 2018.

Such insecurity has led to schools being closed and farmers abandoning their fields in search of safety, which is particularly worrying in a country where 4 out of 5 people rely on farming for their livelihoods.

At least 486,000 people have been forced to flee their homes in Burkina Faso alone, bringing the total number of internally displaced people across the three Sahelian countries to 860,000 people, says the WFP.

Meanwhile, 2.4 million people need food assistance in the Central Sahel.  According to the WFP, this number could increase as displacement continues.  The area is already having to deal with the first effects of climate change.

WFP reports that it has stepped up its response, providing over 2.6 million people with food and nutrition assistance so far this year in the three Central Sahel countries.  WFP efforts have been focussed on areas where humanitarian needs are most severe and where large-scale population displacements have taken place.

WFP said it urgently needs 150 million US dollars for operations under its existing programmes in the area, which are for both emergencies and resilience building.  Funds for relief efforts are running low, it says, and it is faced with the challenge of simultaneously responding to immediate humanitarian needs, while protecting investments made in community resilience and self-sufficiency to ensure that all the gains made in recent years are not lost.