Thousands protest against Salvini in Modena 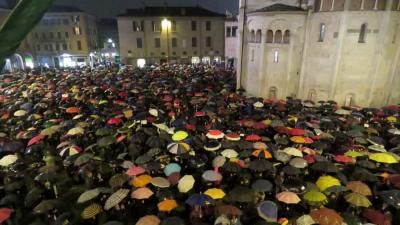 MODENA - Over 6,000 people crowded into Modena’s Piazza Grande on Monday to demonstrate against Matteo Salvini and the League, in a second triumph for the “sardines” protests, said the protest organisers.

Matteo Salvini, leader of the right-wing League party, was in Modena to campaign for the party candidate for the upcoming Emilia Romagna regional elections on Jan 26.

At 7 p.m. Monday the main square began to fill up with people, carrying umbrellas and paper sardines.  The sardine symbol was first used on Thursday in Bologna, where a protest organised by four people over Facebook drew crowds of over 10,000 to protest against the League, who were launching their Emilia Romagna campaign in the university city.  The sardine symbol references the idea of a large number of small fish crowded together.

La Repubblica Bologna put the number of protestors in Modena at 7,000.  Organisers have said that they will continue the fight.  Il Fatto Quotidiano reports that more sardine protests are expected in Tuscany and Campania.