Pope has lunch with 1,500 poor people 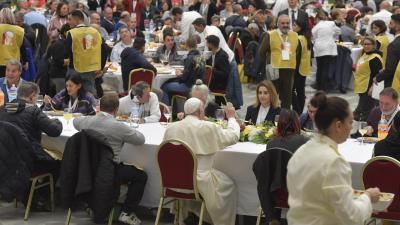 This lunch has become a traditional feature of the World Day of the Poor, an annual occasion established by Francis in Nov. 2016 at the end of the Jubilee of Mercy, a period of prayer.

Mass for the poor was celebrated in St Peter’s Basilica in the presence of poor people from Rome and volunteers from charities that help the homeless and the poorest, such as the Sant’Egidio association.  Bishops, archbishops and cardinals were also present.

The pontiff described the poor as the “treasure of the Church.”

“The poor remind us how we should live the Gospel: like beggars reaching out to God,” he said.

Mass was followed by the Angelus prayer in St Peter’s Square, during which Francis condemned indifference to poverty.  The Pope then joined about 1,500 poor people and 50 volunteers in the nearby Paul VI Hall for a lunch that he described as a “meeting of friends.”  According to Vatican News, this lunch consisted of lasagna, chicken with mushrooms and potatoes, dessert, fruit and espresso coffee.

The Pope pointed out at the beginning of the meal that no products from pigs would be served, in order to include people who cannot eat pork for religious reasons.  Vatican sources report that the Pope was seated next to a homeless Italian man.

In the week leading up to the World Day of the Poor a walk-in clinic to offer free medical examinations to the poor was run in St Peter’s Square, Vatican News reported.

The Pope was scheduled to leave Rome Tuesday for an apostolic visit to Thailand and Japan.