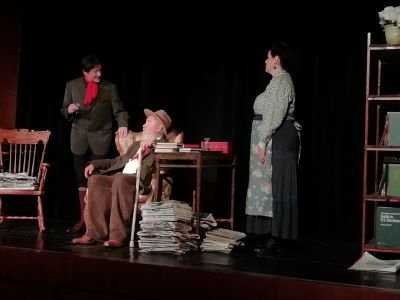 ROME – Donald Olson’s new play Oscar and Walt was performed for the first time on Friday at John Cabot University.  Inspired by real events, it depicts a meeting between two unquestioned literary geniuses, Oscar Wilde and Walt Whitman, imagining how they would have interacted in an energetic burst of humour, sadness and discussion of poetry.

The action of the play – never moving from Whitman’s “den” – is limited to this meeting, its anticipation and its aftermath.

We are introduced to Whitman and his sister-in-law Louisa, a conventional American housewife who struggles to understand Whitman’s philosophy, poetry and (for the time) radical views, some time before the flamboyant Wilde appears – after his entrance, the play is mostly taken up with the conversation between the poets.  Their discussion takes in literature, mortality, ageing, censorship, love and sex.

Wilde met Whitman twice in real life, but the details of their meetings are unknown.  Olson, a novelist, playwright and travel writer who lives in the United States, takes this as a starting point, condenses the two meetings into one and lets his imagination furnish the specifics.

Whitman of course is amongst America’s best poets, while Wilde is one of English literature’s stars – his life and work have been represented countless times.  The writer of a play in which these are the two central characters of a total cast of three, then, has to get their voices right, because the audience will already know them well.

To their credit, Bill Guion and Jonathan Hedley (Walt Whitman and Oscar Wilde respectively) convey the writers from the outset.  Hedley gives us both Wilde's light-hearted insincerity and, later, his true emotions: you can see how this man might have written both The Importance of Being Earnest and The Ballad of Reading Gaol.  Guion too portrays the comedy and tragedy of Whitman's life, his hope and joy in life and nature coming into effective contrast with his old age and the criticism he faced.

But while Olson’s characters are instantly recognisable, this is at the expense of sometimes coming across as caricatures.

Indeed, much of the piece seems forced.  The dialogue abounds in repetitions of points and phrases, just to make sure the audience has got the message.  There are plenty of statements of the obvious, such as explanations of what Whitman is doing in his sister’s house, or what he was trying to do with his poetry, that seem unnecessary and contrived.

Olson switches freely between moments of pathos, plays for laughs and attempts at breaking the fourth wall.  This can seem disjointed, but also allows the audience to see multiple aspects of the characters, most effectively in creating a Whitman saddened by constant criticism but determined to prevent bittnerness from destroying him, although he is not above getting humourously exasperated at the interference of his sister-in-law.

The dialogue swings from being interesting and well-realised by the actors, as in the discussions of censorship, to juvenile in its attempts to be witty.  One cannot help feeling that Oscar Wilde would be rather ashamed of some of the jokes Olson puts into his mouth.

In general, the comedy is less successful than the more serious scenes, some of which are very poignant - above all, the explorations of what it meant to be homosexual in 1882, and how Whitman and Wilde might have dealt with that, are captivating and emotional.

Although there are instances of overacting, the most dramatic sequence comes at the end, the one moment which could have done with more explanation.  Instead, it feels rushed, as we cannot see the characters’ reactions.

Far more so than Wilde, Whitman is at the play’s heart, sitting centre-stage as Wilde and Louisa pivot around him.  As played by Guion, his suffering is engaging and affecting. Even so, by the third time he gets up from the armchair and speaks into the distance, illuminated by a single spotlight, the trick has lost some of its effect.

And this is the problem of Oscar and Walt in general.  It is a portrait of two men about whom it is difficult to say anything new, because it has already been said.  This condemns much of the play to re-affirming what we already know, in ways that are sometimes heart-breaking, and sometimes indifferent.

Oscar and Walt by Donald Olson is produced by the English Theatre of Rome and is at John Cabot University until Nov. 10