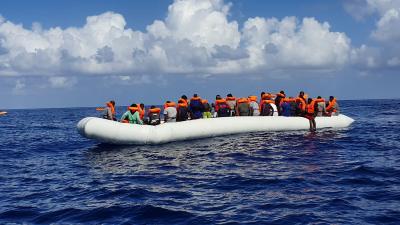 ROME - The Ocean Viking rescue ship, which has picked up some 176 migrants – among them six minors – in two separate operations, once again finds itself seeking a safe port, the NGO said on Monday.

Alarm Phone alerted the NGO ship, jointly operated by SOS Mediterranee and Doctors Without Borders, of an inflatable boat with 74 people on board in serious difficulty Saturday morning near the Al Jurf offshore oil platform.

Authorized to approach within one mile of the perimeter of the platform, the Ocean Viking loaded all 74 migrants on board.

On Sunday, the Ocean Viking rescued another 102 migrants on board a rubber boat in difficulty 40 miles off the Libyan coast.

Among them were 12 women – four of them pregnant – and nine children.

The Ocean Viking turned down an offer from Libyan authorities to disembark the migrants in Tripoli.

“We kindly declined as according to international law and conventions, no place in Libya can be currently considered a Place of Safety,” SOS Mediterranee’s Head of Operations Frederic Penard said. “We strongly urge EU member states and the competent authorities to promptly assign us a Place of Safety so that the 176 rescued people can be safely disembarked.”

This is the first significant case involving an NGO migrant rescue ship since last month’s Malta summit on a new scheme to distribute migrants, and the recent meeting in Luxembourg of EU Interior Ministers.

“The intensification of migratory flows that are putting the countries of the eastern border in crisis requires a European solidarity approach: the most exposed states cannot be left alone," Interior Minister Luciana Lamorgese said.

At the ministerial summits of Malta and Luxembourg, Lamorgese noted a renewed climate of solidarity “necessary for an effective sharing of the problem.”

“Now only a coordinated and shared response at European level can allow an effective strategy,” she said.

“EU governments have failed so far to set up a predictable disembarkation mechanism in accordance with maritime law,” SOS Mediterranee co-founder and vice-president Sophie Beau said. “Ad hoc agreements cannot be the solution. We call upon governments to put an end to this unacceptable situation.”