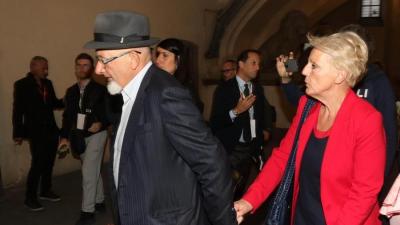 FLORENCE – The parents of former Italian Prime Minister Matteo Renzi, have each received suspended sentences of one year and nine months for issuing fake invoices, judicial sources said on Tuesday.

In addition, the pair – Tiziano Renzi and Laura Bovoli – have been banned for six months from holding management positions. They have also been banned for one year from public offices and dealing with public administration.

“My clients are completely calm. We will certainly appeal,” said Lorenzo Pellegrini, the lawyer of Renzi and Bovoli, who were not present at the trial.

As he has done in the past, Tiziano Renzi has vehemently maintained his innocence.

“I am aware that this is only the first moment. I have total faith in justice and await the appeal process with my defense team,” Renzi said. “I have a duty to believe in Italian justice, today more than ever. And I continue to do so albeit with great bitterness. Because the facts are clear. The work being challenged was regularly carried out, regularly billed, regularly paid. No one can deny this and I am sure that the next level of judgment will prove it. In the meantime, we will immediately appeal. At least it was found that there is not even a penny of evasion – I will spend the next few years in the courts but I will demonstrate total innocence.”

Judge Fabio Gugliotta imposed a sentence of two years on Luigi Dagostino, a property developer from Apulia who had paid the parents of the former PM for the two disputed invoices via the Tamor company.

While Matteo Renzi’s parents were not present at the trial, Dagostino was.

His lawyer also said he would appeal the sentence vowing to annul the offences.

The investigation into the false invoices dates back to 2015 when Dagostino was Managing Director of Tramor, the company managing luxury designer outlet The Mall Firenze.

In this capacity, the real estate developer had entrusted the companies Party and Eventi 6, both headed by Renzi, with feasibility studies for works at the outlet.

In this case, it concerned consulting for a restaurant business and to boost the flow of tourists, particularly Asiatic, to The Mall.

Investigators have deemed these invoices fake as they don’t correspond to the services performed.

According to the Public Prosecutor’s Office, the 140 thousand euro bill for feasibility projects on recreational areas and for catering to the outlet is for consultations paid but not carried out.

The invoice for 20,000 euros was issued by Party S.r.l. (the only bill issued by Party in 2015), the company founded by Tiziano Renzi (who has a 40 per cent share), and Nikila Invest, S.r.l. administered by Iliaria Niccolai (60 per cent), the partner of entrepreneur Luigi Dagostino.

Prosecutor Christine von Borries cited a meeting at Palazzo Chigi on 17 June 2015 between Luca Lotti, who then was serving in Matteo Renzi’s government as the prime minister's undersecretary, Apulia magistrate Antonio Savasta, and lawyer Ruggiero Sfrecola.

The prosecutor, who had extracted the details from Dagostino’s diary, said the meeting was held in Lotti’s office. She said the real estate developer had asked Tiziano Renzi about the matter and that they had remained in the office for 40 minutes with Lotti, Savasta and Sfrecola.

The prosecutor also highlighted the meeting was held on the same day the 20,000 euro bill was paid by Dagostino’s Tramor company to the Renzi Party S.r.l. administered by Laura Bovoli.