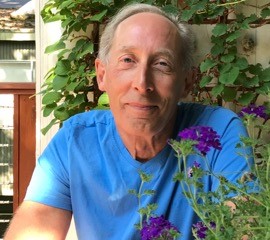 When did you become interested in the poetry and the relationship of Walt Whitman and Oscar Wilde?

In college I began reading 19th-century English and German poets and discovered, on my own, the poetry of Walt Whitman. I was too young to appreciate it or to understand the true depth and complexity of his genius. Wilde I knew as a playwright more than a poet. Much later, when I was reading biographies of Whitman and Wilde, I learned almost in passing that the two had met. It was an intriguing bit of literary history that kept growing in my imagination until it finally emerged as my play “Oscar & Walt.”

What decisions led to you selecting to focus on the relationship between Whitman and Wilde for your play?

I am a literary snoop and I have always been fascinated by the lives of writers. In this case, I saw an exciting creative opportunity to put two of the greatest writers of the 19th century together in one small room to see what would happen when they met. Walt and Oscar both had huge personalities with egos to match. They were both famous. They both loved words and language. But they were shaped by very different cultures and backgrounds and they were at very different stages in their lives. I wanted them, in the course of this one short meeting, to reveal to one another who they were behind the masks they wore in public. I suspected that Oscar had a secret agenda to find out more about Walt. The dramatic possibilities were endless.

Oscar Wilde is a larger than life character. Because of this, what hardships did you encounter when crafting his character for the stage?

If you are going to write about a larger than life character like Wilde (or Whitman) you cannot be afraid of him. You must be able to imagine his private life based on biographical evidence and your own speculative insights into his personality. Actually, I “knew” Wilde quite well because I spent five years researching his life for a play I wrote called “Beardsley,” about the English artist Aubrey Beardsley. Wilde was one of the main characters in that play. After the play, I wrote a novel, The Confessions of Aubrey Beardsley, in which Wilde was again a major character. In that play and in that novel I wrote about Wilde at the height of his fame, and about his shocking downfall. What I wanted to do in “Oscar & Walt” was create a Wilde that nobody had seen before—a younger, fresher Wilde just starting out on his career. The difficulty was in deciding how much of himself the young Oscar might plausibly reveal to the much older Walt Whitman, and why. I had to take a couple of big imaginative leaps to get there.

Throughout the play there are several instances in which you use actual Wilde quotes. Was this done in an effort to create a more accurate representation of the character?

Follow up: Are there any quotes of Walt Whitman?

Well, there are only three or four instances where I actually quote Wilde. The rest of his dialogue, including his puns, wordplay and witticisms, are mine. Writing the dialogue in this play was a great joy because language was so much richer back then, and conversation was considered an art. Because Wilde is known for his wit, I obviously had to make his dialogue as witty as possible, but I wasn’t interested in simply dragging out an endless stream of his greatest one-liners. What Oscar says has to be integral to his interaction with Walt and has to play off of that. This is a conversation between two men of letters. I also wanted Oscar’s joyful use of language to bring out a bit of fun in Walt, who had a great sense of humor but did not often show it. I also quoted three snippets of Whitman’s poetry, and the famous line “I accept reality, and I dare not question it” because that line seems to me to be essential to understanding the strength of Walt’s character. The rest of Walt’s dialogue, like Oscar’s, is my own invention.

Why did you represent the relationship between Whitman and Wilde in this way despite very few biographical sources that describe their actual relationship?

Follow up: How did you go about imagining what happened?

I don’t think one can say that they had a “relationship.” They met twice—and I condensed their two meetings into one afternoon’s conversation. The little information we have about these meetings comes from letters Wilde wrote after meeting Walt. After their second meeting in May, 1882, Oscar wrote “The kiss of Walt Whitman is still on my lips.” That seemed pretty significant, for many different reasons. A closeted gay man, as Wilde was at the time, would have found Whitman’s “Calamus” poems extraordinarily exciting and daring. So I think Oscar was very, very curious to meet Walt and to see how this fearless giant of American poetry actually lived his life. And Walt was curious about Oscar because of Oscar’s flamboyant personality and youthful celebrity—I think Walt was probably a little jealous of Oscar’s glamour. I imagined that there was a bit of celebrity flirtation between them and a frisson that came from the unspoken acknowledgment that they were both gay.

Do you believe that the time period selected for this production plays a significant role in portraying your message about LGBTQ+ rights today?

I don’t write with a preordained message because that would be boring as hell and the characters would be didactic puppets. You have to understand that in 1882, when this play takes place, the word “homosexual” did not even exist, and the idea of living openly as a gay man was inconceivable. Writing about anything that touched on or implied “Greek love” was absolutely taboo—but Whitman had done just that in his “Calamus” poems, and he had paid a huge price for his honesty. In the play, it’s Walt’s defiant honesty about sex that so intrigues and frightens Oscar. I don’t think either one of them could have envisioned a world where the rights of gay people are protected and same-sex couples can be married. If anything, the gay aspect of the play simply throws into stark relief how difficult and dangerous it was for gays then and how different it is now.

Throughout the play Oscar is seen to be deeply touched by Whitman and his poetry while Louisa exerts a conflicting energy. Do these characters act as foils and if so was this intentional?

Follow up: Is Louisa supposed to represent civilized society at this time?

Louisa, Walt’s sister-in-law, has a stern and somewhat abrasive personality but you mustn’t doubt for a moment that she is absolutely devoted to Walt. Louisa has no great intellectual gifts and does not understand Walt’s revolutionary poetry. She is an American woman of her time and class. But she is also extremely curious and fascinated by Walt’s life as a poet and the famous people who come to call on him. Through Walt she has been introduced to a much wider world. I envisioned Louisa as the plainspoken antithesis to the literary concerns of Oscar and Walt. She is something of a comic foil in that regard but her dramatic arc in the play is just as significant as Oscar’s and Walt’s. By the way, despite their intellectual incompatibility, Walt thought highly enough of Louisa to name her as his literary executor. They died the same year, however, and are buried side by side in the Whitman family tomb in Camden, New Jersey. I went there last summer and paid my respects to both of them. 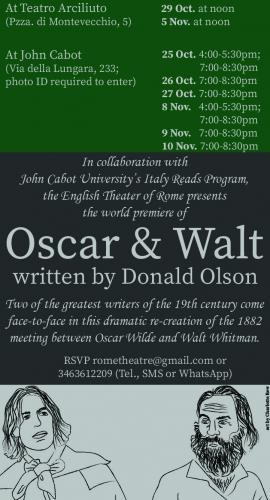