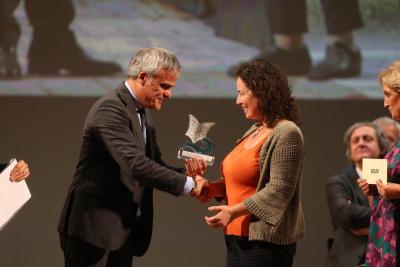 COSENZA – An exiled Turkish dissident who has been tortured and accused of terrorism, has picked up an award in the prestigious Premio per la Cultura Mediterranea held in Calabria on Friday.

Now in their 13th edition, the awards celebrate individuals who make a significant contribution to Mediterranean culture.

“I am very moved,” Selek told the audience at the Rendano Theatre in Cosenza during the awards ceremony. “I wanted to dedicate this award to other women and exiles because 54 per cent of the exiles in Europe are women.”

Known internationally for her work in defence of human rights, particularly in vulnerable communities, Selek was arrested in 1998 in connection to an explosion that killed seven and injured around 100 people at the Istanbul Spice Bazaar. She was released from prison in 2000 after expert witnesses testified the explosion was caused by a gas leak. What followed was a series of retrials and acquittals (2006, 2008, and 2011). On 11 June 2014, Turkey’s Supreme Court of Appeals overturned the life prison sentence handed down in a fourth trial.

Following this ongoing judicial harassment, Selek fled her birth country and now lives in Nice, France, where she continues championing the rights of minority groups.

“In Nice, I’m fighting for the release of migrants, of the poorest, against the borders that block their movements,” she said.

When asked how it feels to be living in exile, Selek continued to highlight the insignificance of geographical borders.

“My nation is olive oil, lemon and eggplant,” Selek added.

Also among the recipients was Peter Frankopan, professor of Global History at Oxford University and Director of the Oxford Centre for Byzantine Research. Frankopan was awarded in the "Luigi De Franco" Human Sciences category.

A jury made up of Calabrian and Lucan high school students chose author Emanuela Canepa in the Young Narrative section for her book, L’animale femmina.

Lucia Goracci, a RAI journalist and documentary filmmaker who worked as a war correspondent in Iraq and Syria, was recognised in the Culture of Information category.

In the Special Prize section of the Presidency of the Carical Foundation, the award went to Francesca Algieri, a researcher in Immunology of the mucous membranes and microbiology at the Humanitas Institute in Milan.