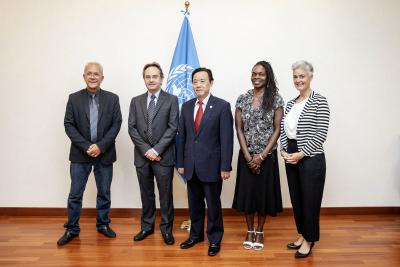 ROME – FAO Director General Qu Dongyu has relaxed a curb on business class travel by hungercrats at the UN agency, raising hopes among staff that China may increase its contribution to the embattled UN agency to pay for an enhanced budget and more resources for the organisation, FAO sources said Tuesday.

Dongyu’s Brazilian predecessor José Graziano da Silva introduced a cost-cutting measure by decreeing nobody from the poverty-busting agency should fly business class unless their journey lasted as much as 12 hours.

The previous minimum journey time for business class travel had been nine hours during the reign of the late DG Jacques Diouf, who died last month.

In a surprise move by the new Communist director general, DongYu decreed the minimum for business class travel should once again be nine hours. The return to the old policy was welcome news for FAO staffers and consultants on long trips around the world, but FAO watchers wondered how the agency can afford to upgrade travel in that way unless Beijing is planning to increase its contribution to the FAO, the exact amount of which has always been something of a mystery.

DongYu continued his rounds of meetings with visiting foreign dignitaries as he finds his feet in his new role. He also had a meeting with staff representatives though a photo of the meeting posted on his web page stopped short of identifying the representatives or naming their organisations.

In another development there was an unconfirmed report that Graziano has purchased an apartment in a smart district of Rome where he may spend part of his retirement on his sky-high DG’s pension.

If confirmed the acquisition could irritate Qu Dongyu lest the Brazilian seek to continue pulling strings behind the scenes at the FAO through executives who he appointed during his reign, FAO insiders said. The presence of Graziano could be compared to that of Pope Emeritus Benedict XVI, who some Vatican watchers have suggested set up a rival papal court to Pope Francis.

Meanwhile lawyers acting for the FAO and its executives who bought a case for civil damages against Italian Insider chief editor John Phillips have begun demanding payment not only of the provisional payment for civil damages each was awarded by an Italian judge in a libel case that concluded last July in the Rome Tribunal but also immediate payment by Phillips of legal costs.

It is normal practice in the Italian courts for legal costs to be paid only if a conviction becomes definitive after going through the appeals procedures.

Asking for legal costs at this stage of the case is highly unusual and another sign that the FAO, despite new management, wants to drive the Italian Insider out of business to end the newspaper’s independent reporting on the UN agencies in Rome and elsewhere, judicial sources said.

Italian Insider has appealed to readers and well-wishers to continue their support of the newspaper by contributing to its crowdfunding appeal on the following link so that the legal action against the newspaper by the FAO does not force closure of the title. Donations to the insider legal defense fund can be made at: