Pompeo to have audience with Pope Francis 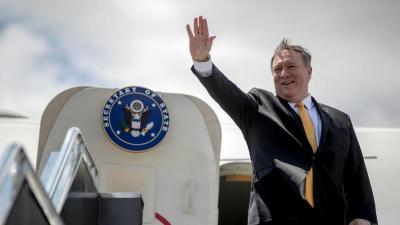 ROME – On his first official visit to Italy as U.S. Secretary of State, Mike Pompeo was to have a private audience with Pope Francis at a Vatican symposium on Wednesday.

Arriving Tuesday in Rome, Pompeo was scheduled to meet with Italian President Sergio Mattarella, Prime Minister Giuseppe Conte and Foreign Minister Di Maio, according to a statement from the U.S. State Department.

The visit, part of a six-day European tour that also takes in Montenegro, Northern Macedonia and Greece, will touch on issues involving global trade and security.

One of the most sensitive topics will be President Trump’s threat to impose duties on European exports, following what the World Trade Organisation (WTO) has deemed ‘illegal’ EU aid given to Airbus.

Expected to deliver a keynote address Wednesday at the U.S.-Holy See Symposium on Partnering with Faith-based Organisations entitled “Pathways to Achieving Human Dignity,” Pompeo will be received by the pope. He will also meet Vatican Secretary of State, Pietro Parolin and the Vatican’s Secretary for Relations with States, Archbishop Paul Gallagher.

On the agenda Thursday is a visit to Pompeo’s ancestral home in the village of Pacentro (Abruzzo) where his paternal great-grandparents were born.